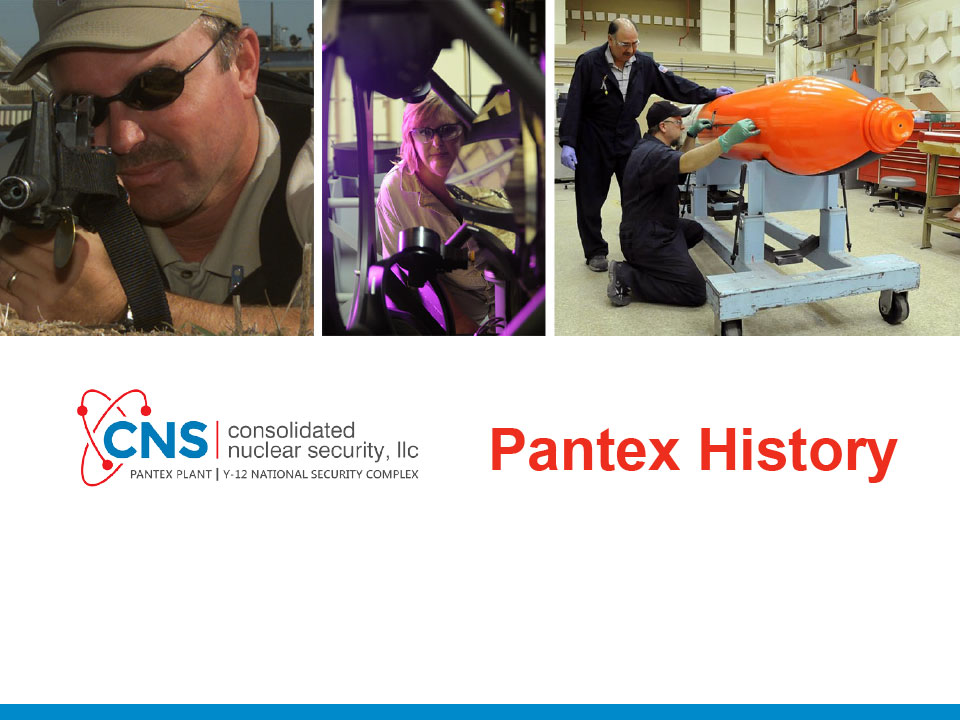 1942: Pantex Helps Win World War II
The desperate need for munitions to fight World War II led to the creation of the Pantex Ordnance Plant, built on 16,000 acres of land east of Amarillo, Texas. Operations began on September 17, 1942, only nine months after the commencement of construction.

The Pantex Ordnance Plant closed on August 16, 1945, just one day after the announcement of surrender by Japan. The land acquired to build Pantex was leased to Texas Technological College (now Texas Tech University) for $1.

1951–1991: Pantex Rebuilt for Cold War Era
The development of nuclear weapons that led to the end of the Second World War, also ushered in a new type of war – the Cold War. The Pantex Plant played a key role in the Cold War, assembling thousands of nuclear warheads that helped maintain the détente between the Soviets and the West.

The federal government reclaimed the land and facilities that made up the Pantex Plant in 1951 and undertook a building campaign to create a cornerstone of the nuclear weapons complex. The Pantex mission continued to grow over the decades as other facilities closed and responsibilities for modification, surveillance, assembly and high explosives operations were moved to the site. Since 1975, Pantex has been the nation’s primary assembly, disassembly, retrofit and modification center for nuclear weapons.

The Present and Future of Pantex
The mission of the Pantex Plant promises to be an enduring one as dwindling worldwide stockpiles of nuclear weapons demand increased reliability to maintain the security of the United States through a credible nuclear deterrent.

Pantex continues its key role of ensuring the safety, security and reliability of the nation’s nuclear stockpile: excess weapons are dismantled, surveillance is conducted on the stockpile and aging weapons are maintained through Life Extension Programs.

The critical and unique nature of work done at Pantex ensures that the site will continue to secure America for decades to come.