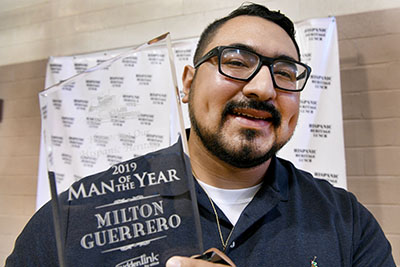 AMARILLO, Texas- The recent Hispanic Heritage Luncheon was the scene for the Hispanic Chamber of Commerce’s announcement for its 2019 award winners. They include the Man and Woman of the Year, Young Rising Star, and Business Community Service.

Pantex’s Milton Guerrero, a nuclear procurement engineer, was named 2019 Hispanic Man of the Year. His role in the Pantex Outreach and Leadership Organization (POLO) leadership, and work in the community are what Milton believes lead to his nomination by friends and co-workers.

“When I got the phone call and was notified that I was nominated and won the award I was surprised. It was something I truly did not expect to win. It was a little bit of everything that I do that got me nominated. From volunteering with POLO at different events, to my overall involvement in the community, along with trying to be a solid resource/co-worker for those here at work.”

Milton added that he grew up in the area, the very neighborhood where the Wesley Community Center is located, and where the luncheon was held. He says he is both honored and humbled by the recognition.

“The award is what I consider a great honor and a milestone. More importantly, it was an opportunity to meet with other community leaders and see where there is a need for people, such as myself, to help out. I feel that it is important for professionals to take an interest in speaking with students about their future career paths and we can’t forget that the youth in our community are our future leaders.