Consolidated Nuclear Security served as a corporate sponsor during the High Plains Food Bank’s Together We Can food drive Dec. 7-12, providing 16,000 meals, which helped surpass the food bank’s 500,000 meal goal. Pantex volunteers also sorted food donations at the drive on Wednesday, Dec. 9, and others delivered monetary and food donations. 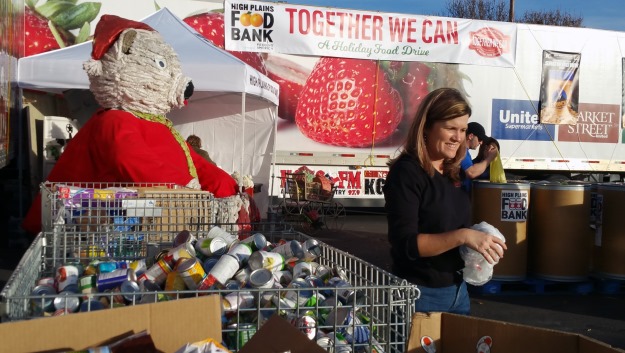 “Pantexans are kind and generous people,” said Laura Bailey, Pantexan and High Plains Food Bank board member. “We asked for volunteers and were flooded with folks who wanted to help. It was a great turnout.”

“As a sponsor, CNS had the opportunity to recognize our employees who do so much for the food bank, raise awareness about the good work performed by the food bank, and thank everyone in the community for their support during the food drive,” Bailey said.

Over the last few months, Pantex has donated $10,000 to the High Plains Food Bank’s Kids Café program and, joined forces with the Metal Trades Council for a donation of $3,250 for general use.

“CNS and MTC’s donations show that the company and employees support the Amarillo area and understand that the basic needs are the most important,” Bailey said. “Hunger kills productivity and potential. Providing food helps people in our community to be healthy, active and more alert. This is especially necessary for children, who need to focus on schoolwork so that they can grow to be healthy, productive adults.”

The High Plains Food Bank reports that the Together We Can food drive received donations for more than 725,000 meals. That will be a huge help because this past year has been particularly difficult, Bailey said. Requests for support have increased, but donations have decreased. Unfortunately, the need in the area is so great that these donations will be distributed within the next few months, she added.

“But I know Pantexans will once again offer to help. That is kind of who we are – Pantexans,” Bailey said.

Tags:
High Plains Food Bank
Together We Can food drive