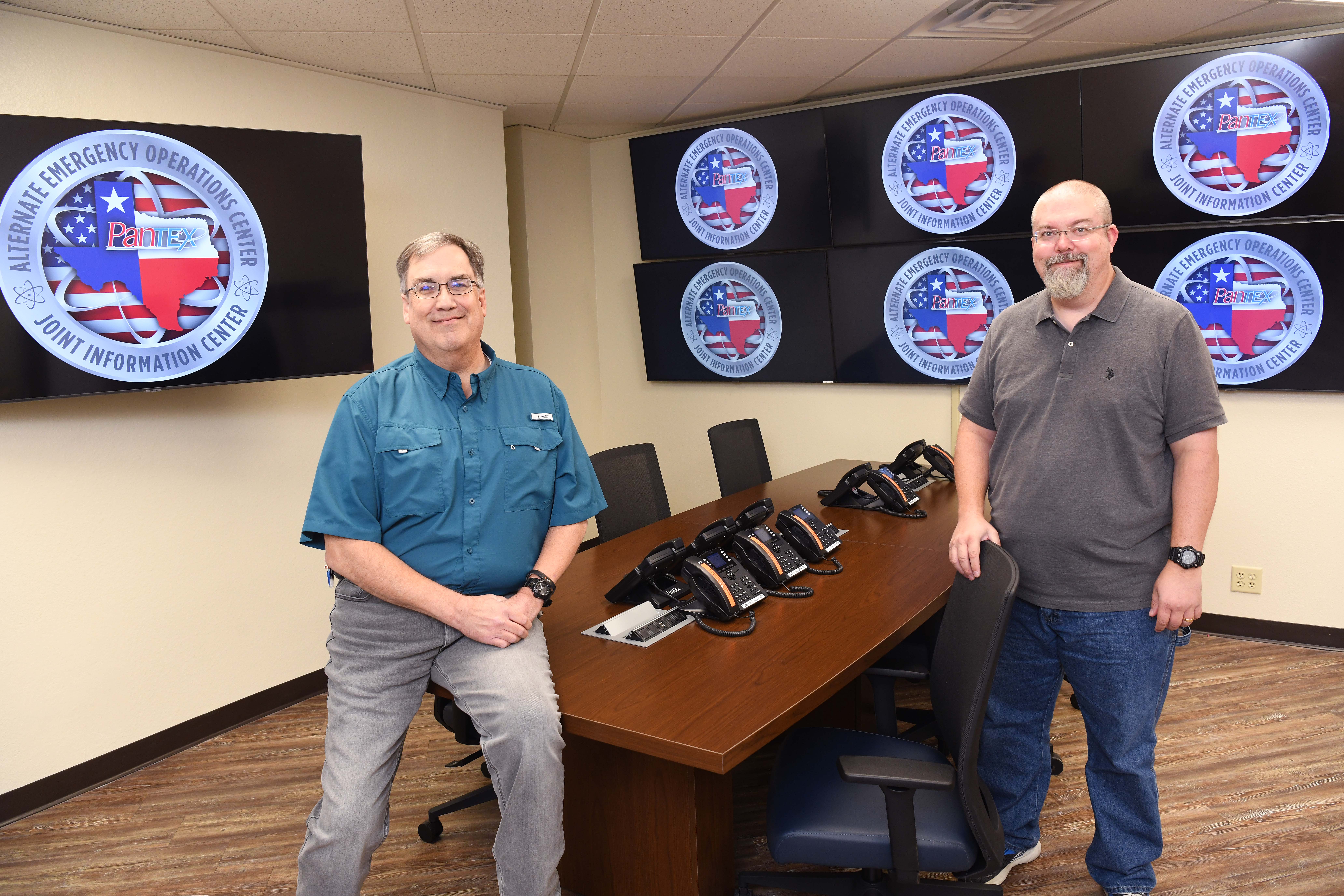 Take five minutes to learn about emergency preparedness specialists Reeves Easley-McPherson and Gregory Roddahl. “I Am Mission Success” profiles share how each employee feels tied to the Pantex and/or Y 12 mission. All views and opinions are the employees’ own and do not necessarily reflect those of CNS.

Sound leadership comprises several key factors: respect for others, a spirit of innovation, and a commitment to excellence.

That is exactly the approach Reeves Easley-McPherson and Greg Roddahl took to a recent assignment, with impressive results.

“Each employee brings their own unique set of skills,” Easley-McPherson said. “So, don’t be afraid to speak up. You might know of a new way to complete a task that is safer, saves time, or saves money.”

Not only that, Roddahl said; standing in the gap to make sure operations run smoothly has its own intangible rewards.

“There’s always something not working correctly,” he said. “Finding it and fixing it before it’s needed lets me know I’m supporting the mission.”

No small part of that mission is following directives. To that end, Easley-McPherson and Roddahl considered the intent of the Department of Energy order that requires an alternate emergency operations center.

“[The order] does so as a part of a life safety and continuity-of-operations goal,” Easley-McPherson explained.

Using that order as a foundation, the men and their teams incorporated the Joint Information Center, two classrooms, and a remote workspace into the new facility in downtown Amarillo.

“I think of it as a Swiss Army knife or multifunction facility that exceeds the requirements of the DOE order,” Easley-McPherson said.

Their innovation not only created a more useful space, but will also save taxpayers some $800,000 over the life of its 5-year lease. That’s something of particular importance to Roddahl.

“Take ownership and pride in what you do,” Roddahl said. “Then, you can take satisfaction in it.”

When did you start working for CNS? If you didn’t begin in your current role, briefly describe your career progression.
Easley-McPherson: “I started working for Pantex in May 2016 in the Emergency Management Department. Growing up in Amarillo, I was surrounded by Pantex employees who were leaders in my church, in Scouting, and as neighbors. Their character and work in the community was admired. I had former Pantexans such as Marvin Willis and Paul Wagner as mentors while growing up. I am proud to be able to follow in their footsteps.”

Roddahl: “I earned my degree in environmental engineering from Texas Tech University and was looking for somewhere I could use it. I began working at Pantex in 2001. I worked for Environmental Projects and the 35-Account Testing Lab before taking a position in Emergency Management in 2010.”

Are you doing what you envisioned as a young adult? Describe how your career compares or contrasts to your expectations.
Easley-McPherson: “I started in Emergency Management in January of 2001. Since then, I have worked at the local, state, and now the federal level in this field. It is an environment of train and prepare, and then test. The drills and exercises we do test the training and preparation. If there is a miss in a drill or exercise, we step back, re-evaluate, and begin the process again. It is an exciting and dynamic career.”

Roddahl: “I obtained my degree to work as an engineer, and I’ve managed to use the skills I learned to be successful in all the roles I’ve had at Pantex. I thought I would be designing drinking-water treatment plants, and I was able to use the chemistry classes and labs to help being successful in the wet-chemistry lab. Now I’ve learned a great deal about how DOE wants their emergency management programs to be run and interacted with other sites and state programs to be successful here.”

What is your favorite aspect of your work environment?
Easley-McPherson: “At Pantex, my work and what I am able to contribute are appreciated and respected. I hear ‘please’ and ‘thank you’ from my management team often. This is a trait that most managers outside of Pantex miss¬¬—you get more from your employees with respect and a sincere ‘thanks.’”

Roddahl: “I enjoy the open-endedness of the work and the variety of tasks to accomplish. While I prefer a stable routine, I also wouldn’t like doing the same task every day forever.”

What advice or encouragement would you give to a new employee or someone considering applying for a career here?
Easley-McPherson: “Pantex is an exciting and unique place to work. In addition to our mission work, we have everything a small municipality would have, such as fire and EMS, police, waste management, transportation, food service, and utilities. Also, no two days are the same — the work is challenging and rewarding.”

Roddahl: “Pantex is a great place to work as a career, or you can move to a new job as your life situation changes.”

As an employee, what do you want to be remembered for?
Easley-McPherson: “I was always willing to help.”

Roddahl: “I’d like to be remembered for the same things I value in others: integrity, trust, and respect.”