Everyone loves that new car smell, as the saying goes, but do you know what causes it? The polymer materials used to build the car’s interior release volatile organic compounds, and the sun’s heat through the windshield is a stressor that increases this release.

Pantex uses polymers to render explosives stable and shapeable during the plastic bonded explosives (PBX) weapons assembly process. When weapons are returned from the stockpile, scientists evaluate the integrity of the explosives and research to determine the stressors (heat, moisture, acid, and radioactivity) that cause polymers in explosives to degrade or fail.

A two year collaboration between Pantex scientists and polymer experts from Tulane University produced a new and unique method of testing some of the polymers Pantex uses.

Pantex scientist Stephanie Steelman, the principal investigator on the project, approached researchers from the Tulane Center for Polymer Reaction Monitoring and Characterization (PolyRMC) after a course that introduced her to Simultaneous Multiple Sample Light Scattering (SMSLS) analysis. 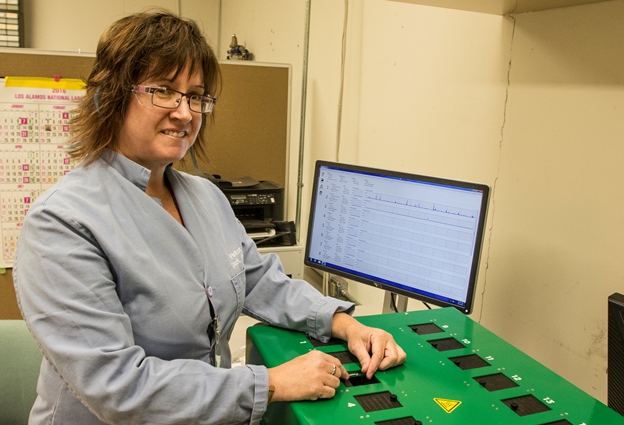 Steelman directs Pantex’s Gel Permeation Chromatography Lab (GPC). “GPC is used to monitor the molecular weight of the polymers in PBXs,” she said. “SMSLS allows us to determine which stressors cause polymers to degrade or fail on the molecular level when in solution, as well as determine when the polymers are in equilibrium for GPC testing.”

Steelman offered another car analogy to help explain the concept.

“The seats in a car eventually wear out. Wouldn’t it be nice to know when they’re going to wear out ahead of time? What would cause them to wear out? Then we’d know when to replace them,” she said.

When Steelman first learned about SMSLS, it was being used only in pharmaceutical and university settings. She thought it could be used at Pantex as well. The researchers at PolyRMC enthusiastically agreed and collaboration began in 2013, with funding from Plant Directed Research, Development, and Demonstration.

The SMSLS instrument takes light-scattering measurements at a rate of up to 10 data points per second to identify degradation of polymers in solution. The SMSLS data identified unique signatures for polymer degradation under temperature stressors. This information can be particularly useful in assessing performance of these polymers over time under different conditions and also build predictions about their stability over time at different temperatures.

“What I’m trying to do is build more quality into the process. SMSLS enhanced my ability to do my job, molecular weight analysis, in a much better fashion,” Steelman said. “If you don’t have the polymer in there doing its job, the explosive won’t do its job.”

After the collaboration project concluded in September 2015, the first commercial SMSLS instrument was located in the GPC Lab at Pantex. The device that scientists nicknamed “smi sls” (rhymes with missiles) bears serial no. 0001.

Alex W. Reed, associate director for Operations and Strategy at PolyRMC, said the roadmap for SMSLS initially did not include this type of polymer application.

“The collaboration with Pantex directly contributed to advancing the development and commercialization of the SMSLS technology,” Reed said. “The first SMSLS at Pantex also means that Pantex may provide some of the earliest new applications of value in the area of polymer stability and non-equilibrium processes.”