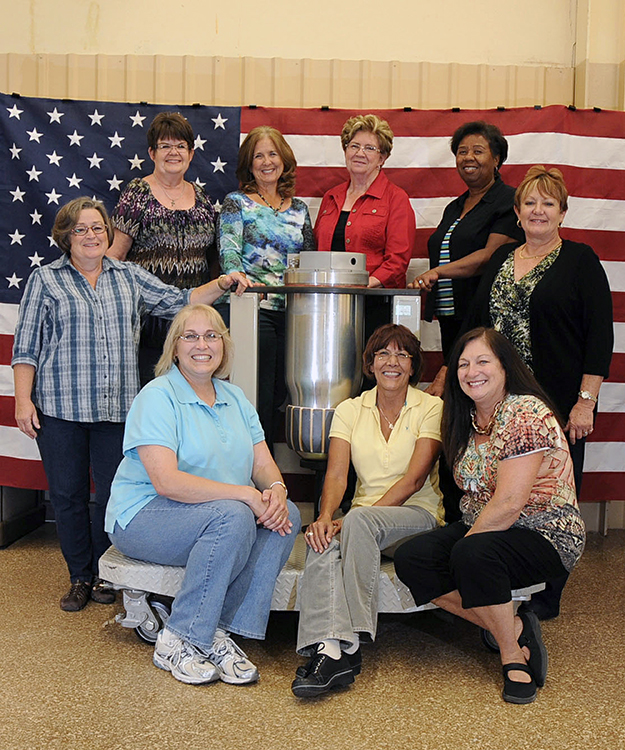 Back in the day, men worked the production line at Pantex. Then came the W80, the first weapons program in which assembly and disassembly were performed by women. Groundbreaking women, dubbed the “80s Ladies,” seized the opportunity to gain the skills
necessary to perform mechanical work.

Called the “common warhead,” the W80 was developed as a multi-service, multi-application weapon and is used in a majority of nuclear-armed U.S. Air Force and Navy missiles.

One of the first women to enter the field in 1979, Peggy Crow, left her clerical job for a position as an assembler/inspector on the W80 program with the goal of earning more money.

“A woman really had to work hard to prove her worth and value,” Crow said. “One thing easier for women was using their hands in small places to complete a process. Also, women were generally more detailed oriented. In the early years in the production area, women had to be resilient
and very open-minded.”

June Cooley recalls a spirit of teamwork and remembers the ladies working together for a common goal. “We had a good work ethic and took pride in doing a good job,” she said. “This took place during the Cold War and there was a common theme among the workers – ‘If we ever have to use one of these, and it gets through, it better work.’”

Bobbye Koenig preferred working with “girls” because guys had a tendency to take the tools and do the job while women watched. “It wasn’t their fault, most guys are raised that way – men did man’s work and women did woman’s work. The bad part of that deal was our work was mopping floors, sweeping and cleaning parts. Give me the tools, I want to do the fun stuff,” said Koenig.

For many, the production line was a jumping-off point for their careers. In 1992, Crow went on to become the first woman in the NNSA enterprise to become a weapons trainer for the W80 program. Another 80s Lady, Betty Whitfield, gained experience with 12 weapons programs
while assigned to the line. “That experience got me where I am today,” said the quality engineer.

“There are so many more women on the line now performing the jobs once delegated only to men,” said Cheryl Phillips, former inspector. “It says something about the character of the women who came before, paving the way, making it possible for us to be able to perform these jobs.”

Today, women at Pantex serve as production technicians as well as engineers, scientists, technicians and managers.

“The years that I worked on ‘the Line’ are among my most cherished memories at Pantex,” said Twanda Taylor, former weapons inspector who carpooled with coworkers on the graveyard shift. “I interacted with coworkers who seemed like close-knit family who looked out for and helped
one another.” Added Wanda Williams, former assembly operator, “We were like a close family and still share the closeness.”