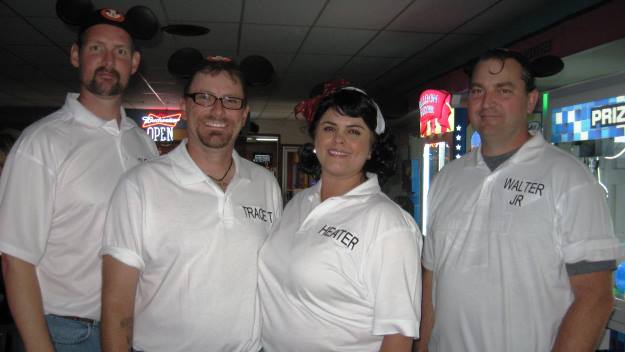 Pantexans are well known for their generosity and going “above and beyond” to help out in their communities and that spirit of giving was never more prevalent than at the recent Big Brothers Big Sisters (BBBS) Bowl For Kid’s Sake. Besides Consolidated Nuclear Security, LLC being a corporate sponsor for this year’s fundraiser, Pantex employees filled lane after lane with bowlers to help raise money and awareness for the mentoring program.

It’s an all-day event with teams coming and going at Western Bowl for bowling fun and bringing in sponsorships that go directly to the BBBS organization, which serves more than 250 young men and women in the Amarillo and Canyon area. Along with those successfully matched, at any one time, BBBS may have up to 150 little brothers and sisters on their waiting list, usually from single parent homes where a young man or woman might not get the one-on-one time with an adult that they need.

At absolutely no cost to the parent, the children, or “Littles” are signed up and then matched up with a “Big” who agrees to spend a few hours a week with their match. Their mission is to help children reach their full potential through professionally supported, one-to-one mentoring relationships. Through fund-raising efforts like Bowl for Kids’ Sake, they are able to keep the program up and running. It’s a huge undertaking for the staff at BBBS, but the rewards are worth every minute spent in fundraising.

“Bowl For Kids’ Sake is one of our agency’s largest fundraisers and accounts for over 30% of our annual budget. Proceeds from the event are dedicated to program costs that directly affect the lives of the children we serve. We are able to help more than 250 children participating in our programs, thanks to our Bowl For Kids’ Sake sponsors,” said Emily Shelton Nance, executive director, BBBS of the Texas Panhandle.

Pantex employees always make up one of the largest groups to be represented with multiple teams being the norm, rather than the exception. Having the site so highly represented is also something that BBBS never takes for granted, and is very thankful for when it comes time each year to let the bowlers roll a pair of games.

“Pantex has been a cherished supporter of Bowl For Kids’ Sake. In the last nine years, more than 147 teams have participated in Bowl and provided needed funding to serve virtually hundreds of children living in our community,” added Nance.

BBBS is planning new and diverse forms of fundraising through the coming months, but it’s a sure bet that Bowl for Kids’ Sake will continue on as usual, with a great feeling of accomplishment from everyone involved, including the Pantexans who will once again takes to the lanes to make a big difference and have a little fun for some “Bigs” and “Littles” who are the real winners.