The Bataan Memorial March is held annually at the White Sands Missile Range in New Mexico to honor the American and Filipino troops imprisoned by the Japanese and forced to walk through the Philippine jungles on the Bataan peninsula.

“It’s a 26.2 mile march through the hills and sand around the missile range,” said Juan Dominguez, a Pantex guard. “This was my third time to participate and it’s not an easy task.” 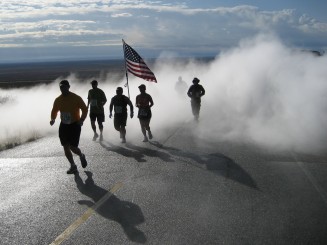 Dominguez got with some other guards in his group, Matt Ramos, Robert Coffman, and Chris Houts, about six months before the annual march, and they started planning their trip through the high mountain desert. Ramos, Coffman, and Houts had never participated before.

“Any chance I have to support or show support for fellow veterans, I try to do so,” said Chris Houts. “It was also a chance to push myself and help build strong friendships with my SPO [Security Police Officer] co-workers.”

Participants march with backpacks filled with canned goods and before they start the trek the bags are weighed. “You can go light or heavy, and the bags are weighed and sealed before you take off, said Dominguez. “Whatever you leave with you carry the entire time and then at the end, the food is donated to the local food banks.”

Not only were the men honoring the individuals that march in the Bataan Death March, but they were able to strengthen their bond and make friends along the way. “The camaraderie with co-workers and participating with other marchers that have a common interest to honor and support our veterans was a huge motivation for me,” said Coffman.

High mountain deserts have enchanting views, but they also have cold mornings, warm days, and plenty of sand, and sand isn’t your friend when you’re walking for miles. Houts had a blister that covered his heel by mile 12. After about 30 minutes of care at one of the medic stations, the group was back on their way. “It wasn’t easy and it hurt like hell, but I wasn’t about to quit,” Houts said.

Coffman added that the march took you up and down the mountain and over different terrain. “You would descend down the mountain on asphalt, then back to the desert terrain and deep sand; you were constantly having to stop and dump sand out of your shoes.”

Despite the rough terrain, the men finished and vow to do it again next year. “My feet hurt for almost a month and my muscles were so sore I could hardly stand for a few days, said Houts. “With all that, it was still an amazing experience and I look forward to the opportunity to test myself again next year.”