Progress continues at the ASC 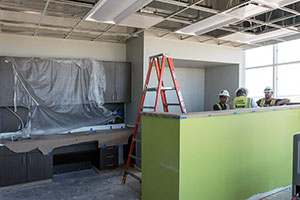 The skyline around Pantex continues to change as work at the Administrative Support Complex progresses. What was a field of milo this time last year is now an expansive building that grows closer and closer to completion with each passing day. Currently, the ASC is on schedule, and several areas of the building are nearing completion.

With the exterior nearly finished, the work indoors has begun to ramp up. For example, on the third floor of the west wing, drywall, painting, the break room, and bathrooms are complete and will serve as the mockup for the remaining break rooms and bathrooms for the rest of the building.

Major mechanical equipment, such as chillers, air handlers, plumbing lift station, and electrical transformers, have now been installed, and the domestic water line between the ASC and Pantex is now in operation. Not only is the skyline changing but traffic and roads are as well. The acceleration and de acceleration lanes on FM 2373 were completed recently and will provide relief for traffic entering and exiting the ASC area.

Upcoming milestones include the completion of the overhead power and the exterior envelope of the building, which is scheduled to take place this month. This month, crews will begin installing furniture, and the parking lot should be completed.

With the progress comes more people working at the ASC site. The number of workers has reached its peak.