Recently, volunteers started arriving at a site where I had the challenging task of leading the deployment of tiny data-loggers onto medium-sized songbirds known as Purple Martins. The Pantex-sponsored site was one of several scattered across the range of the eastern Purple Martin in a continental-scale collaboration studying the declining species. A vehicle full of graduate students from the Department of Natural Resources Management at Texas Tech University (TTU) in Lubbock and several vehicles with graduate students from the Department of Life, Earth and Environmental Sciences at the more local West Texas A&M University (WTAMU) in Canyon arrived within minutes of each other and right on time. 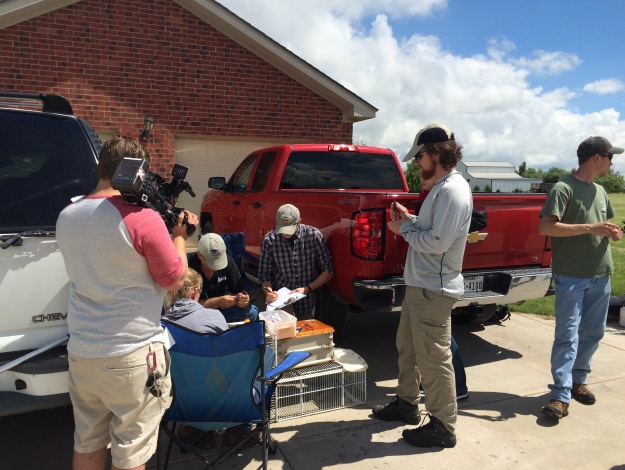 Students assisting Jim Ray with banding and deployment of GPS tags and geolocators on Purple Martins at a colony north of Canyon.

At first, I was too preoccupied with going over instructions and helping the crew get into the routine of trapping, handling, processing, marking and releasing the birds to notice the interaction of the students from the two schools. My primary job of attaching the data-logger and harness onto the back of each bird also required concentration (precision placement, tying, gluing, trimming, etc.) But, as the day wore on there were downtimes as we waited for birds to be captured and in association with lunchtime. As an alumnus of TTU and an adjunct faculty/affiliate graduate faculty member of WTAMU, it was nice to hear the conversations between students from the two schools discussing what projects and species each was working on for their theses and dissertations.

Networking and fun times aside, the work we were doing that day was an important component of a much larger project and collaboration, as well as to the U. S. Department of Energy National Nuclear Security Administration’s contributions under Executive Order 13186, Responsibilities of Federal Agencies to Protect Migratory Birds. The students helped make the day a success, and now more than two dozen Purple Martins will be collecting data during their trek to South America and back. For many of the students the day’s activities provided them with new experience to report on their cv/resumes and to draw from in the future. I know they kept this “older” guy on his toes and I was completely worn out by evening.

We all had a great time together and this was mentioned several times during the day. In fact, it was decided that it would be kind of neat for the two wildlife programs to get together more often! There is always next year! Guns Up and Go Buffs! 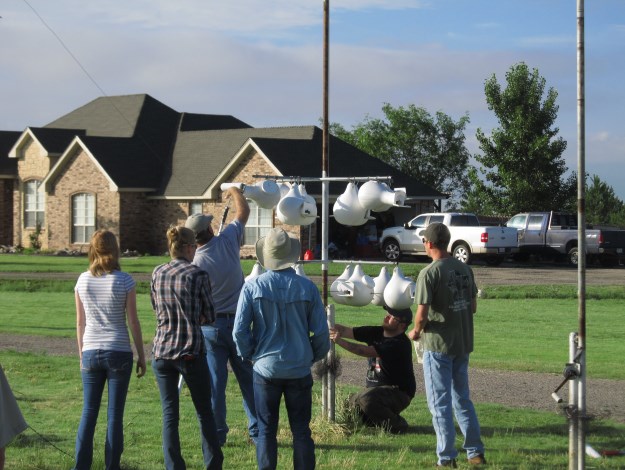