Wild Pantex – Bird of the Day: The Curve-Billed Thrasher

In recent years there has been “a new bird on the block” and I find it interesting that I keep catching them in traps set for skunks, feral cats and other critters. It appears that Curve-Billed Thrashers enter the traps just because they like to explore tight spaces. I also observe them going in and out of spaces under porches, in wooden and steel pallets, in bird houses, and in other tight quarters. Perhaps they are looking for spiders and paper wasps, and other creatures that like structure and darker places. 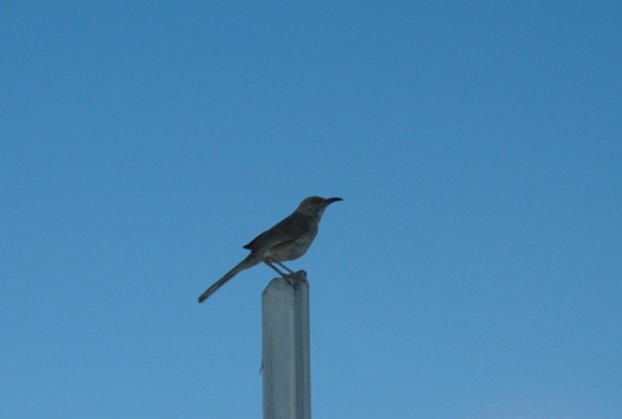 I have chosen the Curve-Billed Thrasher as bird of the day #4. Compared to the previous three “honorees,” the American Bald Eagle, Cliff Swallow, and Dickcissel, the curve-bill will be a new introduction to most of you. However, once clued in here, Pantex employees will notice this songbird throughout the working areas of our facility.

The Curve-Billed Thrasher is one that I became familiar with while growing-up in my hometown of Dalhart, Texas. A pair of curve-bills nested each summer for several years in a large cholla cactus in the backyard of my next door neighbor. I would monitor these nests closely from nest-building through fledging. Through the years, I developed the habit of looking around for a cholla cactus whenever I noticed a curve-bill …and, sure enough, there was usually one nearby. Knowing how cholla feels when I have brushed up against it, I always figured that the bird had an excellent plant to associate with when it came to selecting a place to nest.

Curve-Billed Thrashers are a southwestern bird, occurring in the western half of Texas, the Oklahoma Panhandle, and southwesterly including southern portions of New Mexico and Arizona, and down through the northern half of Mexico. It is related to the more common Northern Mockingbird, looks somewhat like it, except for a longer, more curved bill, and even sounds similar to it, except the thrasher’s voice is more “muffled” than the mockingbirds. It also lacks the characteristic white wing patches of the mockingbird. The juvenile curve-bills’ beaks are straighter than the older birds until they reach their second year of age. These birds spend less time leaping into the air than the mockingbird and more time running and pecking, and plucking insects and other invertebrates from vegetation, and the surfaces under or on man-made structures.

During my first five years of my working at Pantex, our staff did not observe a single Curve-Billed Thrasher, and I really would not have expected to observe many since we do not have any big, mature cholla cacti on site. However, I finally observed one at Pantex in 2004. Out of curiosity, I looked at the U. S. Geological Survey’s Breeding Bird Survey Data for curve-bills and found that major population increases have occurred here in the shortgrass prairie, especially since 2002. These thrashers have a major presence at my home, too, showing daily interest in my Purple Martin houses and my honey bees.

Keep an eye out for Curve-billed Thrashers around our buildings and at home. They are quite conspicuous (activity and sound) and you will find them to be quite abundant and entertaining. They are one of the few songbirds that stay paired and together over the entire year – consequently, you may see both members of the pair. Curve-billed Thrashers are certainly an interesting member of our Wild Pantex.