Wild Pantex – Tarantulas on the Move

In a previous blog, I mentioned that spiders were not my favorite critter to have to deal with. My family will even try to sabotage my tough guy act by telling that I might jump and scream should a spider jump while I am trying to deal with it – which I will neither confirm nor deny.

Now tarantulas I find interesting. At least they are big enough that you can see them. We just came through the period where I get lots of calls and comments in regard to ‘the tarantulas are “migrating.”’ This annual happening in the tarantula world occurs in the early fall, particularly September. While attending Texas Tech University, I distinctly remember impressive numbers crossing the highway during the fall while in the Canadian River breaks and valley during my many trips between my hometown of Dalhart and Lubbock. Some sources also describe a surge in activity during June.

The “migration” is simply the period of activity where males leave their burrows and go searching for females, who pretty much hang out in burrows of their own. Upon finding a female in her burrow, the “gentlemen caller” will approach the female's shelter cautiously, tapping and vibrating his legs. The female will be "lured" out of her burrow, perhaps thinking prey is causing the vibrations, and the rest is history. Sometimes the female may capture and eat the male, but regardless, the male will typically die in the weeks following a successful mating.

The tarantula found in the Amarillo area is the Oklahoma Brown Tarantula (Aphonopelma hentzi), which is often also referred to as the Texas Brown Tarantula or the Missouri Tarantula. This spider was observed in all three upland shortgrass prairie sites during a macro invertebrate study conducted at Pantex by West Texas A&M University during 2000 and 2001. Its distribution includes the prairies of Oklahoma, extreme northeastern New Mexico, southwestern Colorado, southern Kansas, Missouri, Arkansas, Louisiana, Texas, and in Northeast Mexico. A second species of tarantula can be found in the extreme southern Panhandle (for example, Caprock Canyons State Park and the Childress area). This is the Texas Black Spot Tarantula (A. armada) and its range encompasses inland California, Arizona, New Mexico, and parts of Nevada and Texas.

Oklahoma Brown Tarantulas are a burrowing spider with a leg span of about four to six inches at maturity, which they reach at seven to 10 years of age. Males rarely live more than three months after they have matured (and mated), while females are long-lived, capable of living into their thirties.

In nature they primarily live in burrows, sometimes under wood or flat stones, although they can also be found in the abandoned dens of other small critters. They line the entrance of their home with webbing, rigged in a manner to carry them the vibration of passing prey. Prey includes beetles, cockroaches, crickets, grasshoppers, and even lizards, toads and mice.

A behavior that I find fascinating about tarantulas is a symbiotic relationship that they have with the Great Plains Narrow-Mouth Toad, which can be found as close to Pantex as the row of counties to our south. In one study, researchers found that 75% of burrows of the Oklahoma Brown Tarantula were also occupied by 1–3 Western Narrow-Mouthed Toads. These tiny 1.5-inch long toads likely derive protection from their host tarantula, while the spider may benefit from having their nests kept free of ants, which could harm the spider’s eggs and spiderlings. Reportedly, while other animals are quickly attacked when entering a tarantula’s burrow, the narrow-mouthed toad is greeted with a “quick touch with an inquiring foot” and then is allowed to remain in the burrow. The toads even seem to “attack” ants when they get close to the spider’s eggs.

Now that is cool! 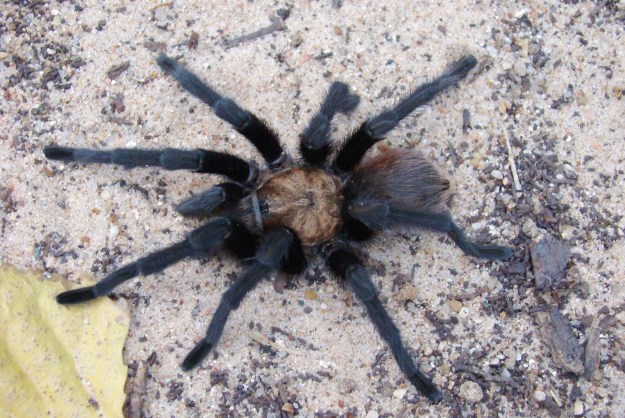