Who doesn’t love bald eagles? My first exposures to them were the several that spent the winters at Lake Rita Blanca near my hometown of Dalhart, TX, when I was growing up. During those months each year of my childhood, it was a big deal to see this majestic bird. They’d be perched in a tree, sitting on the ice, or soaring above the lake. If the latter, the thousands of Rita Blanca’s ducks and geese would whirl around in the sky above the lake with nervousness.

Later, it was my job with the Texas Parks and Wildlife Department to count them each winter as part of my duties as the Migratory Birds and Wetlands Biologist for this region. During ground and aerial surveys, I’d find them often in association with concentrations of waterfowl. The most I ever saw in a small area was ~40 that were congregated near a large waterfowl (ducks and geese) roost numbering near 180,000 birds. There, they were feeding on sick and dead ducks and geese that were victims of the waterfowl disease, avian cholera.

At Pantex, the bald eagle can be readily seen around our playa lakes and our prairie dog colonies during the winter months. Similar to playa lakes providing concentrated sources of waterfowl for them, prairie dog colonies provide prey in the form of prairie dogs, rabbits, and mice and rats; many of which are snatched from smaller, faster birds of prey. In the fall and spring, snakes likely contribute to their diet. You may spy a bald eagle flying overhead, practically anywhere.

Bald eagles nest throughout much of the U.S., but particularly in the north and in the Gulf Coast States. Until recently, the last known nest in the Panhandle was more than 50 years ago. However, a pair has nested in the Dalhart area, annually, over the last several years. Most nests are near water, where the young are fed heavily on fish. However, the Dalhart nest is not associated with water and the U.S.G.S. Cooperative Fish and Wildlife Research Unit at Texas Tech has found that the young are fed primarily on prairie dogs, cottontails, and black-tailed jackrabbits.

Bald eagles get their white head and tail when they are five years old. These contrast greatly with their very dark body plumage. Juveniles are also darker then the golden eagles they may resemble. Keep your eyes peeled – chances are that during the winter months you will have an opportunity to see a bald eagle. I have even seen them flying right over town. Our nation’s symbol is fairly common here; in fact, it is one of the Texas Panhandle’s best kept wildlife secrets. 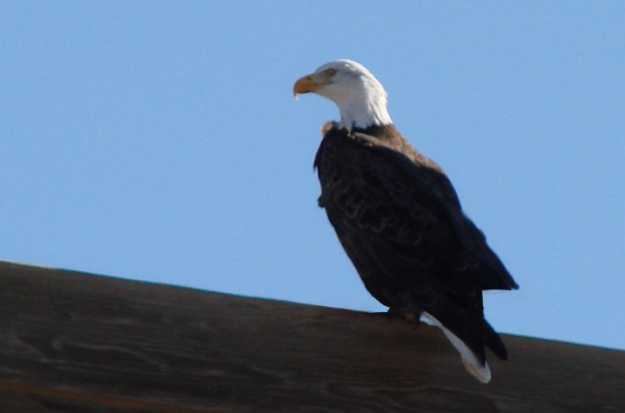