2016 may forever be etched in my mind as "The Year of The Skunk." Certainly among my 28 years as a working wildlife biologist, I cannot remember seeing or hearing about the number of skunks as I have this year. Striped skunks seem to be everywhere; here at the Plant, in town, and even on the broader regional level according to newspaper articles. There have been big skunks, little skunks, single skunks, and mother skunks with tight “clusters” of babies in tow. One day, a co-worker and I watched several babies playing like kittens on a stack of pipes. Skunks appear to be everywhere.

For the first time in my career, I recently had to participate in the act of "herding skunks." Two of us actually had to attempt to “herd” a mother and six little ones across a road (with on-lookers) with the goal of driving them away from the work area of the facility. While I have learned to “herd” an adult skunk down a wall and into a trap situated along the same wall, a family of skunks traveling in the open does not herd easily. First off, closeness and sudden moves are ill-advised when it comes to herding skunks. Secondly, as you can imagine, each “toddler-skunk” has its own mind and, sure enough, one got separated from the group and now we had a new simultaneous objective that involved herding “Junior” back through traffic to join up with the family (now with additional on-lookers present). In the end, we were happy that “Junior” joined up with his family and we let them go their way. They went their way… and we went ours.

As the ‘season of love,’ the February and March timeframe, is normally our busiest time period for trapping striped skunks that have taken up residence under buildings. At that time they are on the move and they congregate for breeding purposes. However, another peak period of activity is August and September, when juveniles are dispersing away from their mothers to find territories of their own. It is also a time when skunks may need relief from the late summer heat and scarcity of water, while the lights of the Plant provide plenty of attraction for moths and other insects; many of which wind up on the ground as food for skunks and other critters that skunks consume. Evening and early morning are not unusual times to see skunks out in the daylight nor is the hours following a rain when flooding may force them out of resting places (culverts, burrows, and under structures) or when wet conditions are conducive to the availability of worms, grubs, and amphibians.

It should be no mystery as to why skunks appear to be flourishing in 2016. The above normal rainfall of 2015, followed by more modest, but evenly distributed rainfall in 2016 has led to and maintained prime cover and conditions for skunks and their prey (small mammals, eggs and young of ground-nesting birds, insects and other invertebrates, amphibians, and reptiles). Good conditions equate to good survival and larger litters.

Skunks really are amazing animals. I do not particularly like having to deal with them, but it comes with the job. You have to admit that members of the weasel family have an interesting means of self-defense. The striped skunk is just one of the many amazing animals of what we refer to as Wild Pantex. 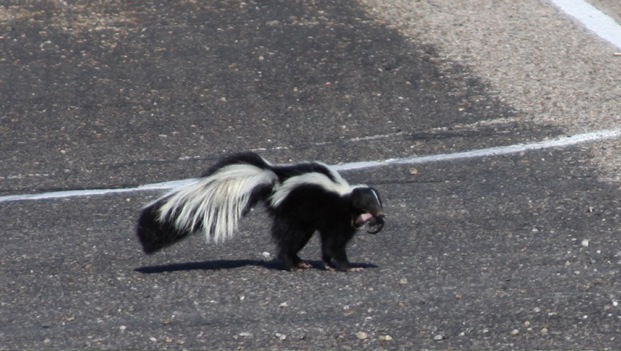 A mother striped skunk moving one of her babies to a new den. She was observed carrying around five little ones in quick succession.