The June/July/August time frame is a busy time for the wildlife program here at Pantex. Nuisance animal calls have picked up as snakes are on the move and birds sometimes don't pick the best place to build their nests.

My hopes are—any day, now—to initiate annual surveys for, and mark Texas horned lizards; our only year-round threatened or endangered species (classified as 'threatened" by the state of Texas.)

But, there is a lot more going on!

West Texas A&M students have initiated surveys of birds and nests in plots of different habitat types across our 18,000 acres. A component of our monitoring association with the Pantex Renewable Energy Project (PREP), this consists of several rounds of surveys that will last throughout the summer. These involve visits to G.P.S. points, and the students record the birds observed and heard in the pre-determined-sized plot, over a specified period of time.

Fourteen of 21 Swainson's hawks that carried PTT/satellite transmitters to Argentina in the fall have made their way back to their nesting territories on and around the Plant. This work is also a portion of the monitoring associated with the PREP, and the year-round tracking ability is a bonus. The U. S. Geological Survey's Texas Cooperative Fish and Wildlife Research Unit at Texas Tech University is taking the lead with this objective.

Last week, volunteers and I captured and equipped adult Purple Martins at a colony off-site with data logger tracking devices. Eleven were fitted with geolocators, like the 24 in 2013, while another 12 were fitted with G.P.S. tags, a much more accurate tracking technology. Both kinds of devices will record their journey from our area, and to and from their wintering areas in South America. This project is a partnership with the University of Manitoba (Canada), York University (Toronto, Canada), the Purple Martin Conservation Association (Erie, Pennsylvania), as well as others. More good migratory work and partnering displayed by Pantex/USDOE/NNSA! Think about it: G.P.S. technology that is now down to the size of the weight of a dime and we are the second entity to use them on this species, and among the first on any species!

Finally, during June, July and August, Sampling and Analysis personnel and I will conduct our annual mapping of prairie dog colonies at Pantex and at Buffalo Lake National Wildlife Refuge (control site). This is a manner in which we monitor our prairie dogs, and we frequently use this data as a habitat layer, over-lain with the data from our animal-tracking studies.

It is a Wild Pantex, and there is plenty going on. 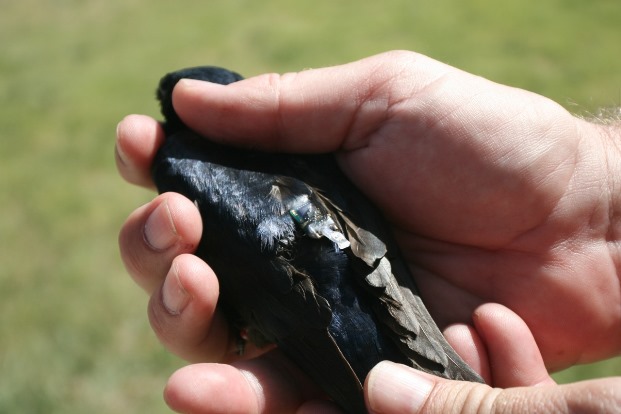 Photo: Participating in a range-wide tracking study of Purple Martins has played a role in Pantex/USDOE/NNSA's three-time nomination for the Presidential Migratory Bird Federal Stewardship Award (2012, 2013, and 2014). An ASY male and a geolocator data logger.,/em>