Wild Pantex – A Bird and How it Relates to Native American Heritage Month, Pantex

As part of November’s Native American Indian Heritage Month, it was a fitting tribute to consider the unique relationship that Native Americans had with a bird that Pantex works with quite extensively. Thanks to several eastern and, especially, southeastern tribes, the Purple Martin earns the distinction of being North America’s longest managed songbird. When European settlers arrived on our eastern shores, they found Native Americans hosting colonies of Purple Martins in their villages. The birds would nest each summer in hollowed-out gourds that the village inhabitants hung for them from cut saplings. They obviously appreciated the birds, whether it was for control of biting insects or those known to damage their crops or the drying meats and skins that hung about their villages. Perhaps another benefit was the warning provided by alarm calls that the birds tend to give when a predator or human stranger approaches. 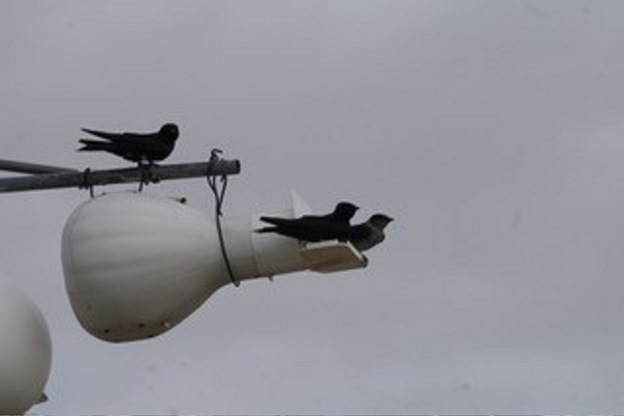 Human's continue to provide Eastern Purple Martins nesting cavities as they have for thousands of years.

It is not known for sure just how long this relationship existed, but it is estimated that the bottle or birdhouse gourd (Asian or African origin) arrived in what is now the eastern United States around 8,000 years ago. Regardless, the relationship propelled Purple Martins east of the Rocky Mountains to shift from natural cavities to that of multi-compartment birdhouses and hollow gourds for nesting. The only known exception, today, is a few pairs that nest in woodpecker cavities in a single stand of flooded palm trees in Florida.

So how does this relate to the United States Department of Energy/National Nuclear Security Administration’s Pantex Plant?

Within the spirit of Executive Order 13186, Responsibilities of Federal Agencies to Protect Migratory Birds, we have spent considerable time working towards the conservation of this declining migratory songbird through a multi-pronged approach. Specific projects involve a unique outreach program that resulted in the banding of over 10,000 Purple Martins among more than 40 colonies in Texas and Oklahoma. In 2013, Pantex expanded this work by collaborating in a partnership led by York University, the University of Manitoba, and the Purple Martin Conservation Association in studies of this bird’s ecology during the non-breeding season. Pantex purchases and deploys geolocator and G.P.S. data-loggers, thus providing a critical study site in the southwestern extremity of the range. Lastly, we have contributed technical guidance to a graduate-level class at Texas Tech University which analyzed data collected by citizen scientists across the range.

Among the benefits of the program; extensive media attention, presentations to bird watching, civic, and technical groups; as well as several publications on the bird, the program, and its results. Co-authored publications led by York University and the University of Manitoba on important stop-over and wintering sites used by Purple Martins are considered “breakthrough” and appearing in the most prestigious of scientific journals. An anticipated publication led by Texas Tech University will indicate the value of managed bird housing in contributing to the continued existence of the eastern Purple Martin.

Amidst all of this work, and myself being fortunate enough to host a colony of Purple Martins at my residence, I often wonder how many generations of humans have provided homes for these birds? As mind-boggling as it may seem, there may very well have been more generations involved in this bird’s management pre-European settlement, than afterwards. We are excited to be able to contribute to conservation of this storied songbird species. 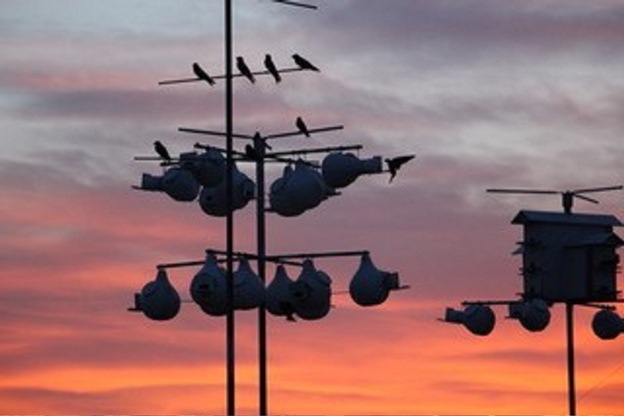