Wild Pantex – The Owls of Pantex

Hearing a pair of Great Horned Owls calling back and forth recently prompted me to write about the owls we have documented at Pantex. The all-time bird list for the 18,000-acre Pantex Plant includes five species of owls: the Barn, Burrowing, Great-Horned, Long-Eared, and Short-Eared Owl. Although their diet includes more than just rodents, owls play a huge role in helping to keep rodent populations in check. Owls are amazing creatures, with some species being able to hunt in complete darkness and catch prey based on sound alone.

Following is a little information on each of the owl species that have been observed at Pantex:

Barn Owl - This medium size owl’s scientific name, Tyto alba, translates to “white night owl.” This owl is fittingly-named, because it appears “ghostly white” while in flight. It is white on the face, body, and underwings and pale buff and grey on the head, back, and upper wings. Their raspy call can be heard at night as they hunt over open habitats searching, primarily by sound, for small rodents. Barn Owls raise one to three broods per year in cliff, cave, and tree cavities, or in buildings, deer blinds, and other human structures. Several pairs nest every year in buildings and other structures at Pantex.

Burrowing Owl - This small, long-legged owl’s scientific name, Athene cunicularia, translates to “wise one who dwells under the earth.” As its name implies, this brown bird mottled with sand-colored spots nests in holes in the ground. The western subspecies found here in the Great Plains is most often associated with colonies of black-tailed prairie dogs where they will raise a brood each year in a burrow originally dug by prairie dogs. Burrowing Owls are quite common in Pantex prairie dog colonies and have been the subject of several studies in collaboration with Texas Tech University.

Great Horned Owl - This large, thick-bodied owl’s scientific name, Bubo virginianus, translates to “owl of Virginia;” Virginia being where the first Great Horned Owl specimen was collected. As its name implies, this owl has large ear tuffs (feathers). The Great Horned Owl’s coloration is mottled gray brown, and it has a white patch on the throat. However, its coloration varies across its range and includes populations that are more “sooty” (far north) and even “mostly white” (Arctic) in coloration. The Great Horned Owl re-strengthens or forms pair bonds in the fall and early winter, and this involves hooting duets where each hoot results in a reply by its mate. The male has a lower pitched hoot than the female. Great Horned Owls do not construct nests, but rather use nests built by other large birds or squirrels, or the existing substrate in broken snags, cavities in cliffs, caves and trees, or in buildings and other human structures. Great Horned Owls begin nesting early and I have found females on nests as early as mid-January here in the Texas Panhandle. A pair or two nest in structures here at Pantex every year.

Long-Eared Owl - This owl’s scientific name, Asio otus, translates to “small owl with ears.” This owl is a medium-sized owl that looks similar in coloration to the Great Horned Owl. However, it is much more slender, its head more square in shape, and it actually has longer ear tuffs than the Great Horned Owl. Other key identifying characteristics are buff or orange coloration of the Long-Eared Owl's face and the fringes of the ear tufts. This bird’s inclusion on Pantex’s all-time bird list is limited to a single observation involving a lone Long-Eared Owl perched in a willow tree. The bird was not observed again and was likely just passing through.

Shored-Eared Owl - This owl’s scientific name, Asio flammeus, translates to “eared owl with fiery plumage.” This wintertime visitor to the southern U.S. is brown, spotted with buff and white on the underparts, and has heavy streaking on the breast. The Short-Eared Owl has a relatively long wingspan and small, closely-spaced ear tufts. However, the “ears” are normally concealed by feathering, only becoming conspicuous when the birds become excited. I love seeing these owls, which we sometimes flush from grassy cover while conducting fieldwork and we often see a few while conducting our spotlight surveys for wildlife.

Owls are among the many types of wildlife that call our Wild Pantex home. 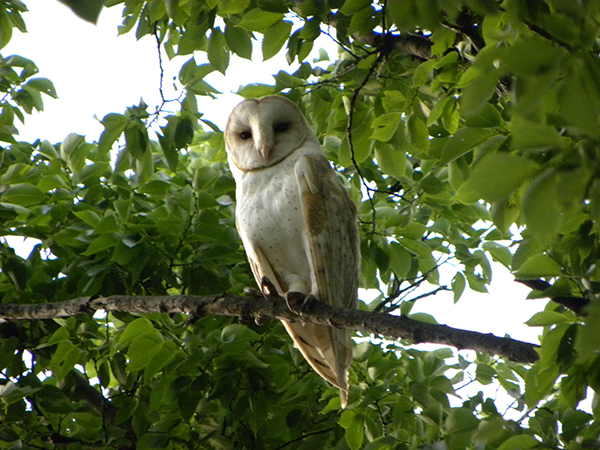 Photo: We don't normally see these owls in trees, but our presence awoke this Barn Owl from its daytime sleep at the USDOE/NNSA Pantex Plant.
Tags:
Wild Pantex
Jim Ray
Owls