I love this time of year because it is "thunderstorm season" here in the Texas High Plains. I am a weather buff, but I also fully appreciate the fact that rainfall is the lifeblood of our area's agriculture, and its wildlife's production and habitat.

I especially like the explosiveness of our playa wetlands in terms of how quickly they come to life following the collection of runoff from spring and summer rains. In fact, these ephemeral wetlands are considered some of the most productive of wetlands in the world. Within days of catching water, eggs that have lain dormant in the dry sediments hatch and the water teems with invertebrates such as freshwater shrimp, and even a species of freshwater sponge. Water-born insects such as dragonflies and midges also proliferate while surface water is available.

I often get questions this time of year about frogs and toads. Why did they appear all of a sudden and where did they come from?

All of a sudden toads are hopping around in our backyards and, depending on species present, playas may resonate, even to the point of a roar (Great Plains toads), with the choruses of frogs and toads. These choruses represent multitudes that have emerged from burrows in the surrounding uplands and raced to the nearby playa for an opportunity to breed. Due to the ephemeral nature of playas, the frogs and toads of the surrounding area may get multiple chances to breed through the years or they may only get a single opportunity in their lifetime.

We encounter the Great Plains toad and Woodhouse's toad in our yards quite frequently. Other species, although locally numerous, may only rarely emerge from their underground burrows. With thunder or wetness acting as a stimulus to bring them to the surface, they emerge and then off they race into the darkness to a nearby playa to perpetuate their species.

Along with West Texas A&M University subcontractors, We have documented 10 species of frogs and toads at Pantex including the aforementioned Great Plains and Woodhouse's toads, Plain's leopard frogs, bullfrogs, two species of chorus frogs, and four species of spadefoot toads. Visit http://herpsoftexas.org/view/frogs for information on the frogs and toads of Texas, including their distributions. 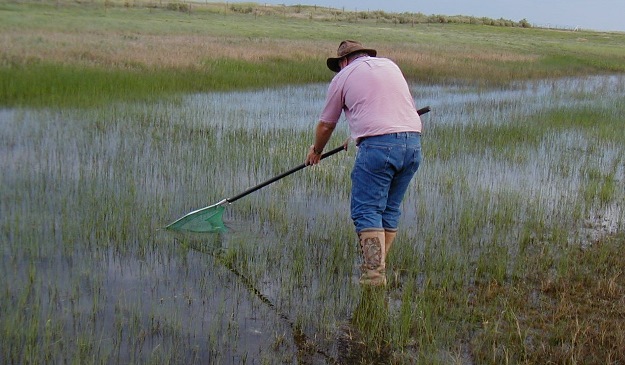