​I grabbed a cup of coffee, hopped into my pickup, and headed out towards what we refer to as the Playa 1 Playa Management Unit. It’s just a quarter of a mile or so up the road from my building. I pull over to the shoulder and watch as several pheasants flush from the sorghum stalks to my right into the grassland cover situated across the road and to the left. It is there that I notice a nice mule deer buck that is working his way downslope towards the heavier cover of Playa 1. He’s alone this time, but usually associated with a handful of mule deer that can be seen pretty regularly in this vicinity. Across our 18,000 acres there are a few other places that mule deer associate with, and like elsewhere in the region this time of year, fields of winter wheat can concentrate them.

And then there are the white-tailed deer. This is where I am intrigued.

Growing up, there were very few white-tailed deer in this plains country. In fact, my mention of them being present in the western Canadian River drainage sparked interest from one of my Texas Tech professors and this led to an aerial survey, my first magazine publication (co-authored with the professor), and talk of a M.S./Ph.D. project that would include the professor’s former mule deer-only study sites.

All of this really hit home to me about a decade later when I was running a roadside pheasant survey in the Pantex-like wheat-sorghum-corn-playa country up near Etter in Moore County. That morning I counted more white-tailed deer than I did pheasants. On and around Pantex, mule deer numbers exceed those of white-tailed deer, but still white-tails are a regular inhabitant of the facility.

Although documented in the past, deer observations became commonplace on Pantex beginning in 2003. Enough vehicle-deer collisions have occurred that we now have “watch for wildlife” signs at each entrance and deer crossing signs at other key locations. This fall, conversations indicate a general belief that our deer numbers are way up this year. Our observations don’t support that. We can still go out to certain places and see small groups of deer; certainly not everywhere, or in unprecedented numbers.

A lot of the recent observations are likely more due to where some of the deer are operating and that we have entered a period when deer activity typically increases. Crop harvests have affected available food and cover, as may the first killing frosts, causing deer to move into new areas or make longer trips to food sources. In addition, the advancing breeding season also has a big effect on deer activity.

My friend Calvin Richardson of the Texas Parks and Wildlife Department (TPWD) tells me that their surveys to the north of the Plant in the Canadian River breaks and basin reveal about a 125-175 acres/deer. For comparison, high deer densities in Central Texas can exceed 5 acres/deer. As expected, as you come up out of the Canadian River basin into the flat cultivated country the numbers drop way off.

Here at Pantex, we have run a set of three 24-mile spotlight surveys each fall since I arrived in 1999 and our terrain is wide open, with high visibility. Our first recording of a deer on this survey was in 2004, and the highest number that we have observed since that time is 20. I fully understand that deer come and go, and thus numbers fluctuate, but the highest deer density estimate that I can come up with is 900 acres/deer. Regardless whether that is a high or a norm, this is very believable considering our habitat, Mr. Richardson’s remarks, and where and how many deer we see during our travels.

The fact is the High Plains of the Texas Panhandle have become deer country, and what a beautiful sight they make in our wide-open, flat terrain. However, wherever you may have to drive, be observant for deer and drive safely. 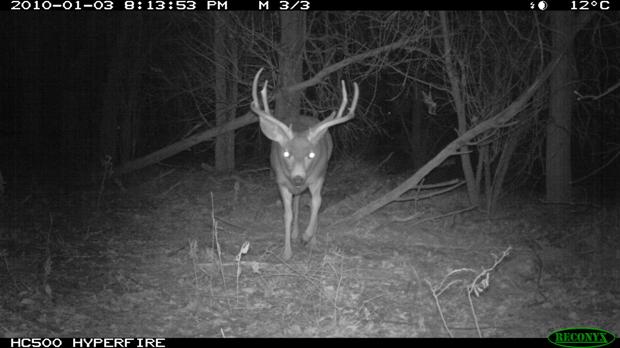