The four remaining satellite‑marked Swainson’s Hawks departed from their nesting territories and are well on their way south towards their wintering grounds in Argentina. The hawks are strung out in migration, with one each in Nicaragua, El Salvador, Guatemala, and Mexico.

Attrition has occurred due to mortality and exhausted battery lives. A number of them have been retrieved and will be refurbished for use next summer. West Texas A&M University, the USGS Cooperative Fish and Wildlife Research Unit at Texas Tech University and Pantex have data of activity related to wind farms gathered throughout the hawks’ annual life cycle, which includes in their nesting territories, along their migration pathways and in their winter territories in Argentina. This work serves as a major contribution to the U.S. Department of Energy/National Nuclear Security Administration’s accomplishments under Executive Order 13186, Responsibility of Federal Agencies to Protect Migratory Birds. Among other things, this executive order promotes research, partnerships and outreach.

Our data, when overlain with maps of wind farms in North, Central, and South America, has enabled us to develop risk models for this species. Combined, all of our marked birds migrate along a narrow path the whole distance between here and the wintering area in Argentina. Data from other regions, when combined with ours, suggest that the entire population of this species takes this same narrow corridor. Especially interesting is that this path includes traversing a narrow mountain pass in Central America. This also begs the question on how many other species and individual birds pass through this same pass. Wind farm proponents have also found this same pass to be suitable for development. Thus, risk models involving situations like this are of great conservation value.

We are now transitioning our work to see if fledgling/juvenile Swainson’s hawks take the same paths and use the same areas, and if windfarms pose more risks to the inexperienced youngsters. Juveniles do not nest and it is unknown how and where they spend the first two years of their lives.

We have other types of data based on before and after turbine installation, distances from turbines and habitat type. This applies to songbirds, bats, and of course, birds of prey. We even have productivity and prey delivery data from nests at various distances from turbines. Our data were useful when eagle survey data was requested by the U.S. Fish and Wildlife Service as part of our inquiry about the need for an Eagle Take Permit (accidental mortality of eagles at turbines).

These projects make up the latest of a long line of research projects on migratory birds that Pantex has worked on with universities, including those on western burrowing owls, purple martins and avian use of black‑tailed prairie dog colonies. These latest projects include monitoring associated with the Pantex Renewable Energy Project. 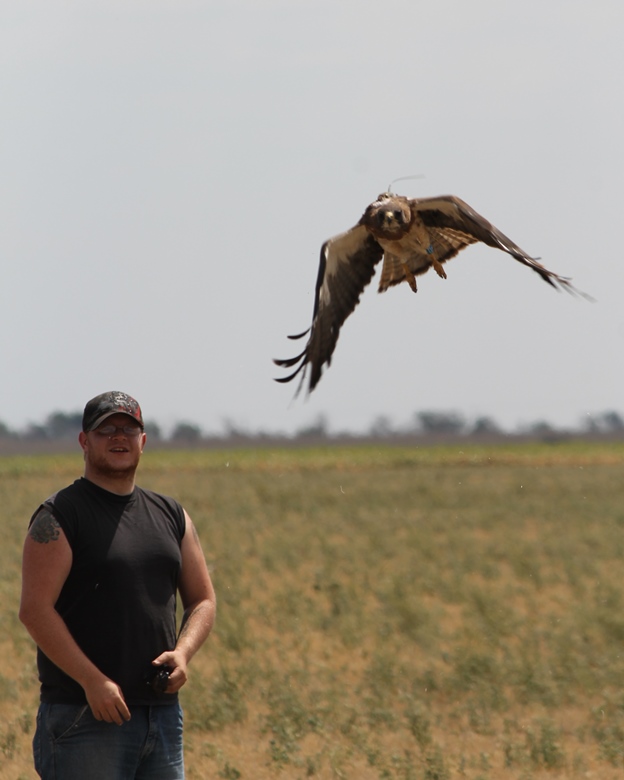 West Texas A&M University student Dustin Henderson releases a Swainson’s hawk that is sporting leg bands and a satellite transmitter. If you look closely, you can see the antenna coming off the bird’s back.