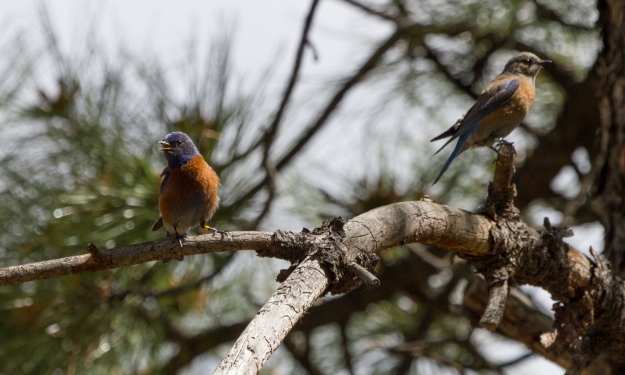 One of the great things about my profession is the opportunity to meet fellow wildlife professionals and see the great things they are doing. One such 'wildlifer' within the U.S. Department of Energy/National Nuclear Security Administration complex is Chuck Hathcock from the Los Alamos National Laboratory (LANL). We both serve on the U.S.D.O.E. Migratory Bird Working Group and we have been corresponding for a couple of years. Although we have never met, it is clear that we appreciate each other’s work. Upon hearing a little about Chuck and his intern Maria Musgrave's work on two cavity-nesting birds at LANL, I invited them to contribute to a guest blog on Wild Pantex.

The Avian Nestbox Network at the LANL by C. Hathcock and M. Musgrave:

About 25 percent of the area is developed, which means that LANL provides habitat for a variety of animal life including herds of elk and deer, bear, mountain lions, coyotes, foxes, rodents, numerous species of bats, reptiles, amphibians, invertebrates; and a myriad of resident, seasonal, and migratory birds; along with federally-listed threatened and endangered species. Much of the region functions as a refuge for wildlife because of access restrictions, the lack of permitted hunting, and management of contiguous U.S. Forest Service lands.

As a LANS biologist in the Environmental Protection Division, my primary role is to minimize impacts to sensitive species and their habitats and to ensure all activities and operations comply with federal and state regulatory requirements for biological resources protection. I feel fortunate to work at this institution and to be able to help in the conservation of imperiled species. Keeps me pretty busy.

One of the long-term studies I manage is the Avian Nestbox Network (ANN). The bulk of the fieldwork is done by wildlife interns. I’ll let our post-baccalaureate intern, Maria Musgrave explain.

The color of a bright sky and a cheerful, friendly song: it’s no wonder that bluebirds have long been symbols of happiness and good luck. But that’s not the only reason that scientists at LANL created the ANN to study bluebirds and other secondary-cavity nesting birds.

The ANN began in 1997 and the main objective is to measure bird populations and productivity as an indication of the health of the ecosystem at LANL. Since then, the ANN has reached nearly 600 nestboxes and is a full-time job for four students during the field season. During the breeding season, birds are looking for the perfect place to build their nests and lay their eggs; fortunately, by providing them with nestboxes it is also ensures a way to easily monitor them.

There are two target species that are banded and closely studied: the Western Bluebird and the Ash-throated Flycatcher. Upon finding one of these two species in a nestbox, that nest is closely monitored so that the nestlings can be banded and the success of the nest can be documented.

There are many possible reasons for a nest to be unsuccessful, and LANL is trying to better understand these occurrences; it is often due to predation, but it is not always clear. To this end, one recent addition to the project has been the use of iButton temperature data-loggers that take readings from within the nests and outside ambient temperatures. With this data, it hopefully will become more clear when a nest becomes too hot or too cold, or the exact time when there are no longer live birds in the nest.

The nestboxes span many of the canyons and mesa-tops on LANL and surrounding areas. By studying the nests at these various sites, there is a growing long-term dataset that can give valuable insight to how avian populations are changing.

Some of the nestbox locations are in areas formerly impacted by mission work but these and other factors not directly linked to LANL, such as climate change, predation, and hazards on wintering grounds. For the students and scientists working on such a grand scale project like ANN, each nestbox represents a piece of the greater whole. And it’s not bad working with bluebirds every day! 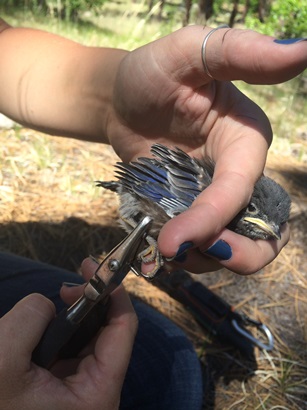