To bee or not to bee…

Pantex is home to a diverse wildlife population. From large and small mammals, birds, reptiles, and amphibians, down to the tiniest insect, just about any creature that calls the Panhandle home, is right out our back door. We keep interactions down to a minimum, but the occasional swallow or curious snake encounter has to be addressed. 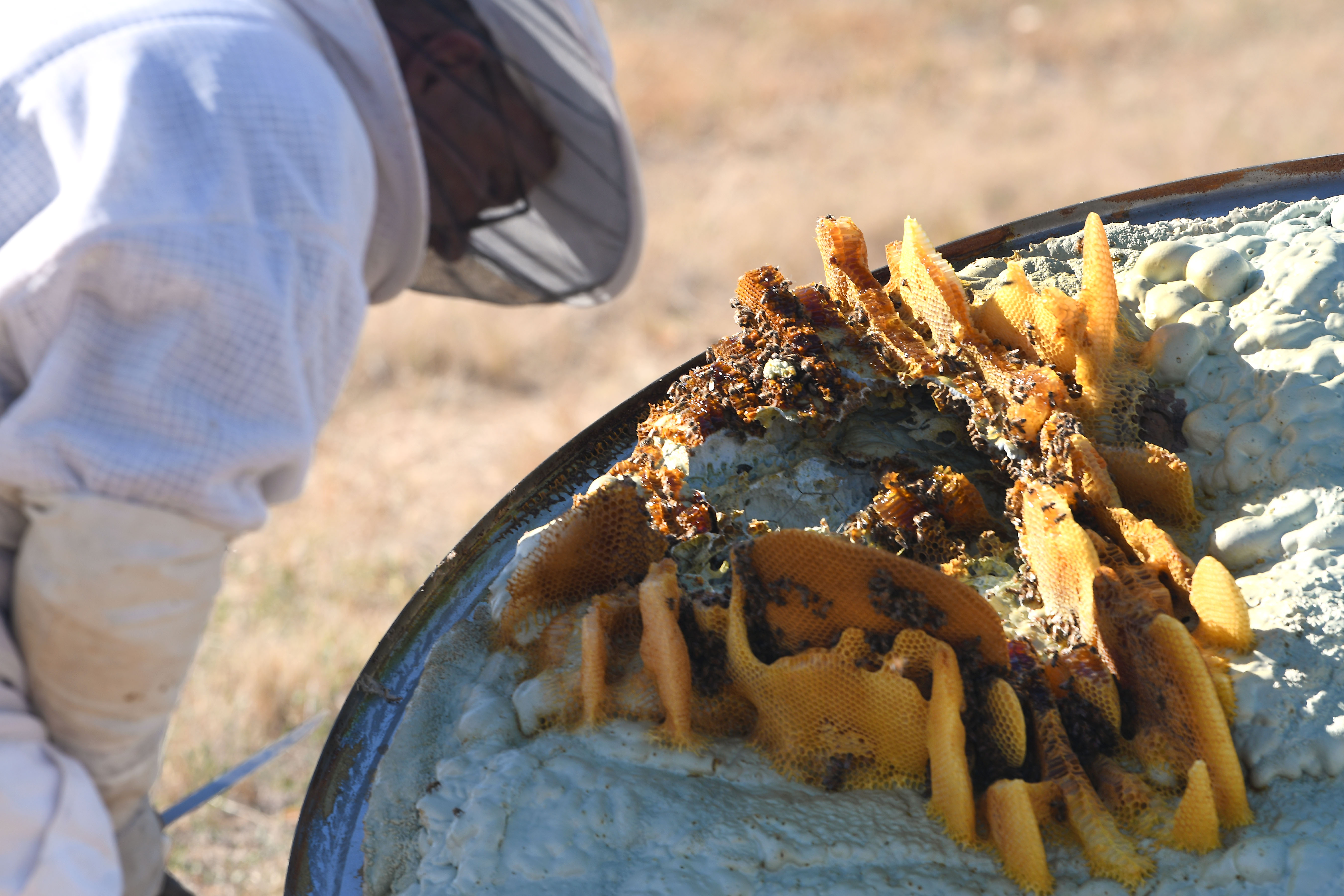 Recently, our wildlife biologist found himself and two other employees having to deal with a large population of bees. They were becoming increasingly agitated by weed eaters and yard equipment. So, biologist Jim Ray, along with Monty Schoenhals and plant employee/bee keeper Joe Froeschle, had the formidable task of moving the hive from its location just outside the northern boundary of Playa 1 in a drip irrigation system, with minimum injury to themselves or the bees.

“This hive created a safety hazard for personnel that access the valve box for operation and maintenance of the irrigation system, “according to Pantex Wildlife biologist, Jim Ray. “In fact, the hive was discovered when several personnel operating weed-eaters were chased out of the area by the bees. The workers received several stings.”

A typical hive contains between 50,000 and 80,000 bees, and best guess is this one fell into that category. Using a homemade bee extractor out of a shop-vac, the bees were gathered up and re-located to Joe’s house, to join his other colonies. They believe the queen was extracted without harm, since bees swarm to their queen wherever she is and the relocated honey gatherers appear to be going about their business.

“Whenever a hive is encountered our first consideration is whether or not the hive is accessible to where we can remove it and transfer it to a beekeeper,” according to Ray.

Bees are considered an indicator of how well or how poorly the local environment is faring. As pollinators, bees play a part in every aspect of the ecosystem. They support the growth of trees, flowers, and other plants, which serve as food and shelter. In fact, pollinators like bees, play a key role in one out of every three bites of food we eat. Without them, many plants we rely on for food would die off.

“Our choice to spare this hive and transfer it into the care of a beekeeper is within the spirit of national pollinator initiatives, where federal agencies have been tasked to protect and promote pollinators – pollinators support entire ecosystems and many species of pollinators are in decline,” added Ray. 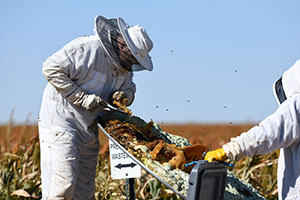 The relocation of this hive is considered a success. The newly-homed pollinators are settling into their new digs alongside other bees, Pantex workers who were at risk from bees due to their proximity while performing work are safe, and though it’s hard to believe by looking at the photos and the sheer number of bees involved, but the three completed the task, without issue.

The hive/honeycomb were found on the underside of a wastewater lid.

Using a homemade bee removal shop-vac tool, the bees were vacuumed up and moved to Joe’s house to join other hives.

The honeycomb is also removed while bees swarm around the collectors.

A small portion of the bee colony that was re-located for the Pantex workers’ safety and theirs.