Operations at half a dozen aging Pantex buildings will come together under one roof at the High Explosives Pressing Facility (HEPF), which is expected to be complete in November 2013. The new facility will greatly reduce the movement of high explosives at Pantex, increasing safety and aiding production, as high explosives moves can restrict other Plant operations. 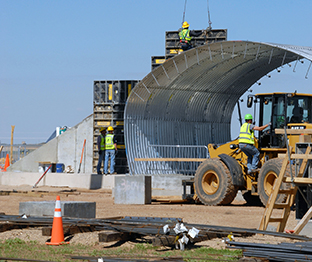 What sets HEPF apart from other facilities constructed at Pantex is the technological advances in design on which engineers have capitalized. The 3D Building Information Model (BIM) approach, provided by B&W Pantex and CH2M Hill, was employed to ensure all aspects of the facility were captured in the design. The design tool optimizes coordination in systems-intensive facilities
and allows the team to “see” critical interfaces between structure, systems, and operating equipment.

“It enables us to derive material quantities both as total and installed counts, compare against the contractor’s invoices and review proposed design changes as well as field deviances to keep control of the overall and detailed design,” said Steve Forman, project engineer. “This is
groundbreaking for maintaining construction progress.”

The HEPF 3D BIM was so successful during the design phase of the project that DOE supported funding to maintain the 3D BIM throughout the four-year construction period. This allows for the model to be updated daily, weekly or monthly, as needed, to keep it an ongoing “as-built” that reflects real-time changes in the field. On project completion, Pantex Maintenance will use the BIM to enhance maintenance capabilities throughout the life of the facility, which should result
in significant cost savings, according to David McCown, maintenance manager.

“The 3D BIM made it possible to correct utility and system conflicts during the design phase of the project and eliminated 500 Requests for Information during construction that the contractor would have submitted, which would have impacted cost and schedule of the project and ultimately startup of the facility. An independent government estimate determined that these
cost savings were between $7 and $10 million dollars,” said Rodney Whisenhunt, project manager. 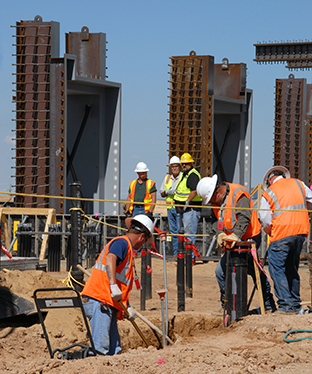 According to Fabian Thomas, NNSA Production Office federal project director, the 3D design has pioneered a new approach to the design and construction of future industrial facilities. “The HEPF 3D BIM is the new standard and has changed the method that Line Item Projects, those greater than $20 million, will be planned and executed at Pantex as well as throughout the NNSA,” he said.

HEPF 3D BIM was selected as a finalist within the category “Innovation in Industrial Facilities” in the Bentley BE Awards, ranking it one of the top three design projects in the competition for Best Practices for Sustaining Infrastructure, according to Robert Cole, program manager.

The HEPF project, constructed by Kiewit, managed by the U.S. Army Corps of Engineers and supported by the B&W Pantex project management team, is on budget and on schedule. Startup and commissioning are projected to finish ahead of schedule in April 2016.

When completed, the HEPF will provide increased levels of protection for workers, improve pressing operation efficiencies, eliminate single points of failure for the pressing process and support the U.S. Department of Energy’s High Explosives Center of Excellence for manufacturing at Pantex.