Pantex and Y-12 received numerous 2014 Defense Programs Awards of Excellence. The award program highlights those who have made a significant difference in improving any phase of the nuclear weapons life-cycle process. The recent awards ceremonies at each site honored programs from the 2014 fiscal year. At the ceremony the following team was recognized.

You see it on television shows, in movies, and it’s just as popular at Pantex — additive manufacturing, also known as 3D printing. For several years, Pantex has been advancing in this area and taking advantage of the endless possibilities it can bring. Recently the Pantex Additive Manufacturing Program, made up of the team Tek Ferguson, Royce McGrath and David Thomas, received recognition at the Defense Program Awards of Excellence. 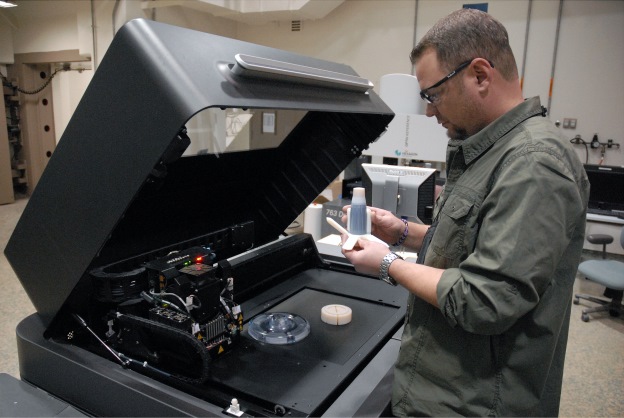 Before getting into the various parts the program manufactures, it’s important to clarify why it’s called “additive manufacturing.” The traditional process that is used to create parts is technically called subtractive manufacturing. This is because a mass of material is whittled away, with a lathe or other tooling machine, until the desired part is created. The result is not only the part that was created, but also a pile of waste that was subtracted from the original mass in order the make the designed part. With additive manufacturing, you are adding layers of material together to create the part, leaving little to no waste with the end result.

Two experts who get to make the magic happen are Tek Ferguson, an applied technology specialist, and Royce McGrath, an engineering technician. Both gentlemen have been working with additive manufacturing for more than three years. The machine that does the most work at Pantex is the Connex 500, a printer used for the past three years. Pantex and Y-12 worked together to purchase SML 280 printers that will be located at each site. “The Connex 500 prints polymers ranging from rubberlike material to hard plastics,” McGrath said. “The SLM 280 is a metal printer that uses high power lasers to create each layer by melting the fine metal powders.”

“It’s amazing the stuff we can make now; the parts that took weeks or more, now can be finished in a few days,” McGrath said about the 3D printers. 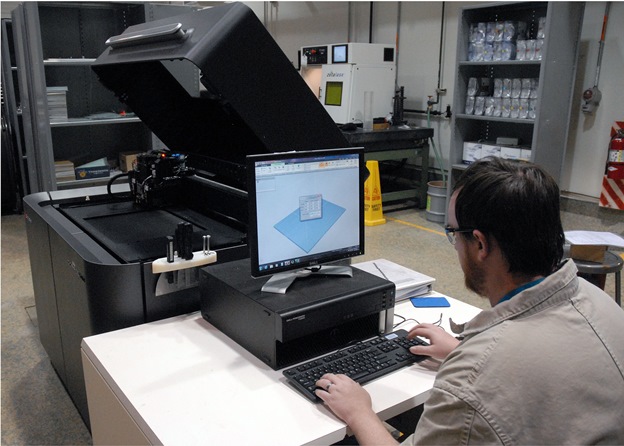 Royce McGrath prepares the Connex 500, one of the printers used in Additive Manufacturing.

With time and cost savings always a main goal, there is a reason why the additive manufacturing program is popular. It’s in such high demand that Ferguson said the printers are running every day, creating a new part for almost any of the departments at Pantex.

“We’ve made up to 600 parts in one year,” Ferguson said. “The main department that needs parts is High Explosives. They blow up a lot of our stuff.”

One of the biggest reasons the Additive Manufacturing Program has done so well is that engineers have found how much cost savings take place using the 3D printers versus traditional machining, especially when the part will end up in a million pieces at the firing sites.

Matt Reyes, a scientist in the High Explosives Performance and Surveillance Operations Department, may be their number-one customer. “I can have someone come up to me asking if I can build something for them and really all I need is the time to design it, machining time is no longer an issue for several parts,” Reyes said. “They are getting pieces printed as quickly as I can design them.”

The way 3D printing works, adding layers, means that what can be created is really only limited by the mind. With traditional manufacturing, intricate parts and hard-to-reach areas could create roadblocks in getting a product finished, but now that is not an issue. Parts have been made that help the production technicians with their training and have even revamped how some testing is done. Ferguson created a new and more efficient way to test materials with the HE holding fixture.

“In the past to test materials you would have to use glue, acrylic sheets and other materials just to hold a sample for testing,” Ferguson said. The problem with the old way of testing is that there is a tedious process that is required to remove the glue, acrylic and material before it can be disposed of properly.

“There are barrels of these that need to be disposed of, but it takes time and the special process before they can be sent to the burning grounds, with this new fixture the whole thing can be disposed of with no problem.” McGrath added.