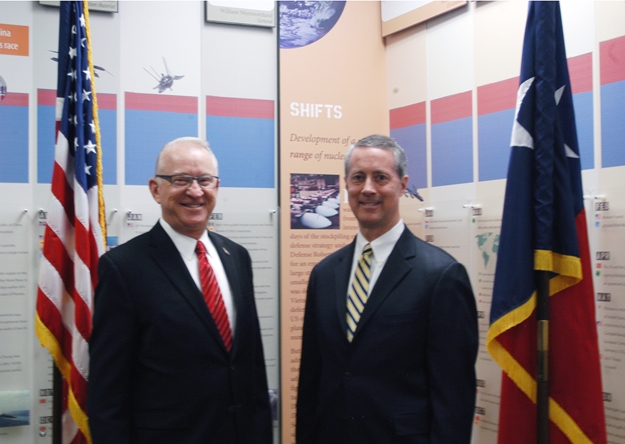 The two senior leaders of the House Armed Services Committee (HASC) visited the Pantex Plant Tuesday to tour the facility and deliver a message of support to the workers.

U.S. Rep. Howard P. “Buck” McKeon (R-Calif.) told an assembled group of Pantexans he was aware of the critical work done at Pantex through his role as the HASC chairman, but seeing it firsthand really made an impact.

“When I saw that weapon being put together, I was so thankful that you’re all here to do this work,” McKeon said.

McKeon traveled to Pantex with HASC vice chairman, U.S. Rep. Mac Thornberry, whose district includes the Pantex Plant. Thornberry talked about the challenging budget situation facing all levels of government and the importance of maintaining the capabilities of facilities like Pantex.

“What you do here is very, very important, and it needs to be protected,” Thornberry said.
After taking questions from several Pantexans, the two Congressmen concluded the all-hands meeting with a few final words of encouragement.

“(Pantex) is a crown jewel,” McKeon said. “You’ve kept us safe for many years, and you should be congratulated for that.”