When the biggest blizzard in 70 years is bearing down on your nuclear weapons facility, you’d better have a good plan and a dedicated group of people to execute that plan. 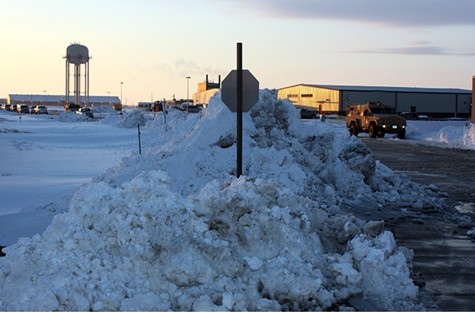 The Pantex Plant was fortunate to have both those elements in place on February 25 when a massive blizzard dumped 19.1 inches of snow – the second highest total ever recorded in Amarillo – on the plant. To make matters worse, 70-mile-per-hour winds whipped up drifts ten feet high.

More than 100 dedicated Pantexans spent the next 48 hours helping to dig out and secure the plant, enabling the nation’s primary nuclear weapons assembly plant to return to operations after only two days of lost work.

Most importantly, the massive recovery effort and return to work were accomplished without a single lost time injury and no substantial damage to facilities or property.

Forecasters were predicting the looming blizzard could be a record breaker, so the Pantex Yard Group broke out the snow plan and started looking for volunteers several days before the snow started falling. Nearly 30 members of the Yard Group stepped up to help ensure the plant could weather the storm. They were joined by more than 100 Security Police Officers, firefighters, plant shift superintendents, equipment mechanics and emergency services dispatchers who were prepared to ride out the storm.

“It just shows how selfless our people are, because every one of them had families that were snowed in while they were out here,” said Plant Maintenance Department Manager Lew Monroe.

“They made a conscious decision to be here to help ensure this facility recovered and returned to operation.”

Operations at the Plant were suspended late Feb. 24 in advance of the storm, and when it finally arrived, snow quickly overwhelmed the efforts of the Yard Group. Heavy snow was compounded by howling winds that created huge drifts and reduced visibility to essentially zero. Snow accumulated so quickly and so deeply that four-wheel-drive security vehicles and even a fire truck became stuck in the snow.

After a couple hours of working in whiteout conditions, the Yard Group was forced to retreat indoors and hunker down. As soon as the snow stopped, workers moved out into the howling wind with heavy equipment to start clearing paths through the drifts. 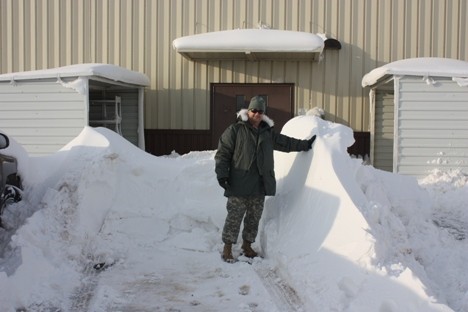 To ensure safety, the workers operated in teams of two or three to start clearing the 57 miles of paved roads and 28,000 linear feet of sidewalks scattered across the 16,000-acre site. David Taylor, yard group supervisor, said many of the equipment operators have decades of experience at Pantex and know the plant like the back of their hand.

“All of our crews who volunteered to come out take great pride in what they do,” Taylor said. “They see it as a service to this country to make sure this Plant is taken care of.”

The crews immediately focused on opening critical areas of the plant to ensure security and emergency services were able to move freely. The battle was nonstop, as the winds continued to whip the snow around, often requiring roads to be plowed three or four times. The snow caused significant issues with the electrical distribution system, requiring several of the plant’s high voltage teams of electricians to brave the weather to help keep the electrical system at the plant operational.

For 48 hours, work crews battled the elements, working long shifts and sleeping where they could before finally being able to declare the plant open for operations Wednesday morning.

“As these guys were leaving the plant, they were glad to go and get some rest. But a lot of them were still worried about whether they’d done enough,” said Yard Group Supervisor Vance Morrison. “That tells you just about all you need to know about their dedication.”