Professional women for the WIN

For two women who represented Pantex and Y‑12 at the U.S. Women in Nuclear national conference in July, the organization lives up to its acronym — WIN — by offering win‑win benefits of professional development and networking.

Megan Houchin of Y‑12 and Evalita Perez-Bobb of Pantex participated in the national 2016 conference, “U.S. WIN: Building on the Promise of Nuclear Energy,” held in Charlotte, North Carolina. Houchin, whose job title is Lean Six Sigma Black Belt, is the president of the Oak Ridge WIN chapter. Perez‑Bobb, an electrical engineer who joined Pantex a year ago, is nearly as new as the recently formed Amarillo Pantex WIN Chapter, which is about eight months old. 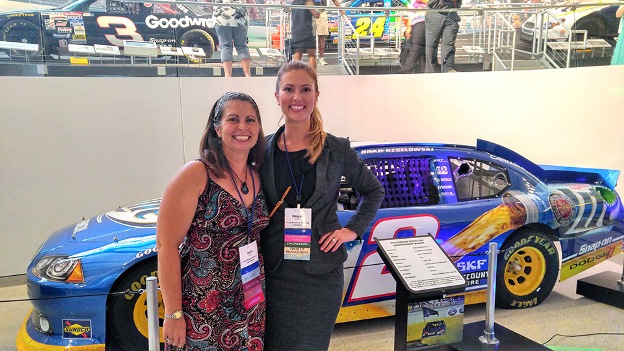 Y‑12’s Megan Houchin, right, enjoys a Women in Nuclear networking event at the NASCAR Hall of Fame in Charlotte, North Carolina. With her is Julie Ezold of the Oak Ridge National Laboratory.

“We do a lot of professional development. We call it womentoring,” Houchin said. “Most people think WIN is for nuclear engineers, but it’s not. It’s for anyone in the nuclear industry — which is everyone at Consolidated Nuclear Security.”

After joining Pantex about a year ago as an electrical engineer, Perez‑Bobb wondered if the organization offered peer networking like she experienced serving in the Navy. She was glad to hear that Pantex employees were establishing a WIN chapter.

Perez‑Bobb attended the conference as a last‑minute substitute and wasn’t sure what to expect. Walking into a panel discussion, she immediately recognized a familiar face and a connection to her naval service. Retired U.S. Navy Admiral Robert Willard, now president and CEO of the Institute of Nuclear Power Operations, was commanding officer of the USS Abraham Lincoln when she served on the aircraft carrier.

She said it was also amazing to see that two of the four panel speakers were women: Lynn Good, CEO of Duke Energy Corp., and Maria Korsnick, CEO of Nuclear Energy Institute.

“The women there were great, so inspirational. They were presidents, CEOs or top national experts in the nuclear energy field. I was grateful for being given the chance to socialize with so many women nuclear professionals in one place,” Perez-Bobb said.

Houchin had a similar experience as she chatted with a woman seated next to her at the lunch table, the president of one of the Savannah River Site operations.

Closer to home, the chapters meet monthly and often host guest speakers. Recent professional development topics include Facilitation 101 and networking. The chapters also take part in community outreach, such as Introduce a Girl to Engineering, and members speak at schools.