Pantex and Y 12 received numerous 2014 Defense Programs Awards of Excellence. The award program highlights those who have made a significant difference in improving any phase of the nuclear weapons life-cycle process. The recent awards ceremonies at each site honored programs from the 2014 fiscal year. The Pantex Tester Design team was recognized at the ceremony.

The Pantex Tester Design team received a DP Award for designing, fabricating and implementing the PT4176 digital ohmmeter on the W88 program and will expand implementation to the rest of the active programs. 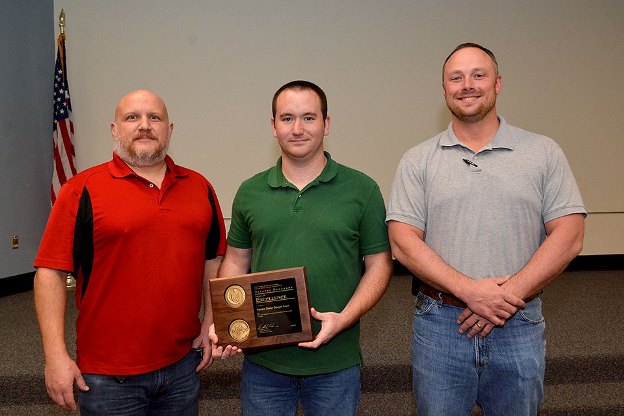 From left: Erich Grebel, Dustin Allen and Paul Brock accept the Defense Programs Award for their work on the Pantex Tester Design.

Team member Erich Grebel said, “For me, our team’s greatest accomplishment was the ability to coordinate and implement design specifications from three laboratories, the Department of Defense and the United Kingdom. At times the design requirements were conflicting or competing, but implementation of this tester to meet the needs of all of the interested parties, while meeting core design requirements, was an incredible engineering task.”

The PT4176 replaces a 35 year old, unsupportable tester that is the most widely used tester at Pantex. Design of the new tester was a challenge because of the wide array of requirements for this single ohmmeter. The team was able to address these challenges and the result was a safe, reliable and accurate tester. The PT4176 has been qualified for use on explosive components and nuclear weapons, and offers significant benefits to Pantex, the design agencies and DoD.

Working on this team helped Grebel see his role in the Front Line of Global Security. He said, “Category 1 testers are a critical component of certifying the nuclear stockpile. These testers provide quantitative data that is used in determining function, monitor degradation and perform surveillance on nuclear weapons. The PT4176 will be the most widely used tester for our nation’s nuclear deterrent.”