In honor of Women’s History Month, we will look back at four historical articles about women at Pantex.

Part one of the series is an October 1942 article from the Pantexan, an employee newsletter.

Women on the Job

Capable hands will nurse the booster line into operation 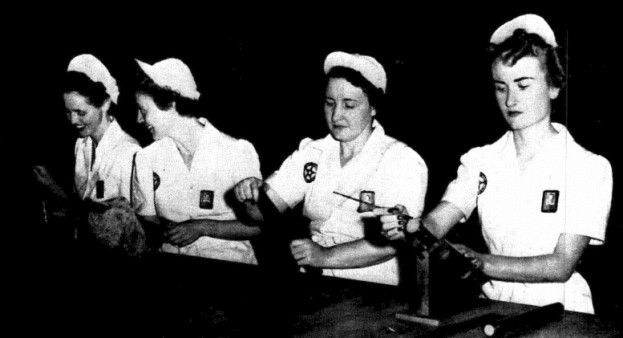 With the christening of the Booster line comes the advent of the use of women in actual production work at Pantex.

Every day more and more women are being employed in the nation’s war industries. Married women with husbands in Australia work beside girls with sweethearts in Ireland. Pantex Ordnance Plant is following the national trend of using women workers whenever possible. They will be the backbone of production in Zone 6, outnumbering the men about five to one.

Although the baby area in size, the Booster line has a man-sized job to do. Line Superintendent Frank L. Poeltler and his crew have shown in their preparations that they are capable of fulfilling that obligation.

The supervisory staff has spent much time in insuring the best of working conditions. All wearing apparel for both men and women is furnished and is serviced in the respective change houses. It is laundered regularly to insure cleanliness. Men wear the regular powder suits and shoes.

Careful consideration has been given to the problem of women’s working apparel, paying attention to the factors of comfort, safety and convenience. The outfit decided upon is a neat appearing combination of style and utility.

The women wear white cotton gabardine culottes, which button from neck to hem so that a skirt effect is produced when buttoned. These may be left only partly buttoned for more freedom.

A full cap with a jaunty bill which may be worn straight or tilted is the standard headwear. It is notable that no two of the women wear their caps alike.

White lisle stockings and two-toned powder shoes complete the visible ensemble. The same care was used in the selection of the unmentionables as was used for the rest of the outfit. It may be that the uniform will be changed to slacks and anklets later on, if found to be more practical.

In Booster building jobs requiring nimble fingers the women are more capable than men, and are equally competent in many other duties. There are several types of operations involved, from strictly manual to completely mechanical. The women have shown the greatest interest in operations involving a machine or mechanical “gadget,” and have shown greater aptitude than men in the use of micrometers and balances in the quality control operations.

Much false information has been spread, by persons unqualified to have opinions, about the dangers of this work. When the facts are explained by well-informed instructors, these fallacies are seen to be ungrounded.

Whatever dangers are inherent in this department, as well as in other departments, are well guarded against by safety regulations, which, if carefully followed, minimized the possibility of accident or illness.

Strict cleanliness is one of the safety regulations and makes for health, happy working conditions. The assembly rooms are kept cleaner than most parlors and are really quite pleasant.

Steam heat will be used to combat the “northers” which could be quite and Axis ally otherwise. Enclosed ramps and change house stairs will add their bit towards subjugating Old Man Winter.

All in all, the best conditions obtainable are being provided, so that no occupational accidents or illnesses can interfere with the women who are helping in building up Uncle Sam’s ammunition supplies. 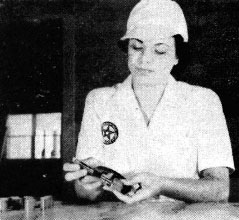 Ernestine O’Brien uses a micrometer to ensure exactness in production.