Pantex and Y‑12 received numerous 2014 Defense Programs Awards of Excellence. The award program highlights employees who have made a significant difference in improving any phase of the nuclear weapons life-cycle process. The recent awards ceremonies at each site honored programs from the 2014 fiscal year.

We have all done it as a child — trying to guess what is in a wrapped present. You might have picked it up to see how much it weighed or shook it to see if you could figure it out. Now, imagine trying to do that but not being able to really touch the package. A group of employees in the Non‑Destructive Evaluation Operations department was asked to perform a similar task when Lawrence Livermore National Laboratory wanted them to X‑ray a part of the B83 program to see how it was holding up. This required the team to X‑ray the B83 component while it was still in its container. 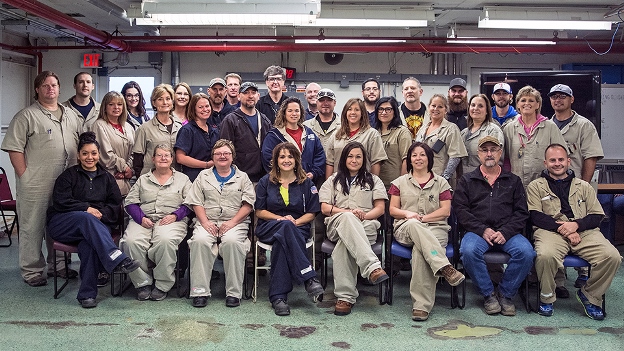 The B83 Sealed Insert Radiography team.

“Normally, we can take parts out and position them so that we are able to get the best view and ensure we are seeing the part needed,” said Aaron Buxbaum, Pantex Production section manager. “In this case, for various reasons, we were not able to take it out of its storage container.”

The component from the B83 program had already been sealed in a container, and taking it out would be a timely and costly process. Rather than unsealing the containers, the B83 sealed insert team worked around that roadblock and found a way to successfully X‑ray the component, without disturbing it inside the container. Before starting the process of X‑raying, engineering instructions had to be written and flex training had to be taught to the technicians involved.

“Our technicians did an outstanding job on this project, and, thanks to them, we were able to see what we wanted to see,” said Buxbaum.

There were several items to be X-rayed, and the team was able to fulfill the request and provide Lawrence Livermore with the necessary data.

“We were able to X‑ray all of the items that were requested,” said Bobby Hutchison, Production section manager. “And not only were we able to complete the assignment, but we were able to do so without disturbing the part’s existing condition and lessened the amount of radiation exposure.”

Not only were they successful, but the team was able to implement a new cost‑saving technique that is available to use on other programs if ever needed.