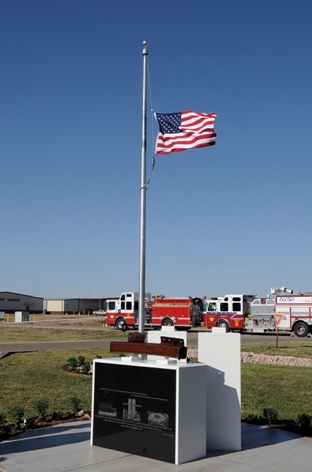 As the nation approaches Patriot Day, the memories created by the attacks on September 11, 2001 will forever be engrained in the minds and hearts of Americans, and those events forever bound the nation together in Patriotism. The memories of that day will never be forgotten, and each year the anniversary of the September 11, tragedy brings Americans together to remember the bravery of both first responders and everyday heroes.

As lasting tribute to those first responders and everyday heroes, a memorial with a connection to the 9/11 tragedy was built right here at the Pantex Plant. That connection? A piece of steel from the World Trade Center.

This steel was incorporated as part of a permanent memorial monument to those lost on 9/11 and can be found outside of the Pantex Fire Department.

“It is extremely appropriate that we place this memorial in front of the building that houses our first responders, because it serves as a symbol of our gratitude for the service they provide to this Plant,” Mark Padilla, Assistant Manager for Programs and Projects with the NNSA Production Office (NPO), said at the monument’s dedication in 2013. “It also serves as a bridge between our first responders and the first responders who gave their lives on that fateful day.”

Plans to create the monument at Pantex began in 2009 with a letter to the Port Authority of New York and New Jersey requesting a piece of the World Trade Center for a memorial monument. Once onsite, the steel was cut onsite in Pantex’s Machine Shop.

“It is important that we can visually see something tangible and realize that what we do at Pantex is important to our freedom and the American way of life,” said Donovan Morgan, retired Pantex Fire Department battalion chief, who spearheaded the memorial initiative.

“During the attack at Pearl Harbor, the sleeping giant awoke,” said Herrera. “During the attack at WTC, it united all fellow Americans, both civilians and serviceman, as brothers and sisters. It changed the way we live and made us more aware of the existence of terrorism around the world. As I walk past the WTC memorial, I will remember the civilians that died on that day and the dark moments this nation has endured.”

In addition to the monument in front of the Pantex Fire Department, two other pieces of steel from the World Trade Center are on display at the NNSA Production Office onsite at the Pantex Plant and at the Pantex Visitor Center.

Each of these monuments and displays is a permanent reminder of the lives lost on September 11, 2001, and the patriotism of all Pantexans and the roles we play in national security.

Below are the reflections and remembrances on September 11, 2001, from some of Pantex’s first responders.

On September 11, 2001, my wife and I were on our way to the Chicago O’Hare International Airport returning home from vacation. On our way to the airport we heard the gut-wrenching news that the Towers had been struck and that the United States was under attack. After returning home and to work as a firefighter, I noticed that the relationship between the public and their local firefighters had grown in response to the 343 brave firefighters that lost their lives while trying to save others.
— Jamie Hall, Firefighter, Pantex Fire Department

On the day that the Twin Towers fell, I was eating breakfast with my pregnant wife and baby boy. As I looked into my son eyes, I couldn’t help but consider the many children waiting at the door for a parent who would never return. I watched as Fire, Police and EMS freely gave their lives in service to others. On that day, we were a nation that lost its innocent but renewed its allegiance. Out of the rubble a nation was forged, once again we became the “United” States of America.
— Joshua Brown, Captain, Pantex Fire Department

The Pantex Fire Department was completing daily readiness checks of apparatus, communication equipment, and personal protective equipment. I was in the department’s training room when a firefighter came and said an aircraft crashed into a New York skyscraper. It was a very hard and traumatic day for America. America and the world lost many precious lives that day, and continue to lose 1st responders and civilians today due to the contamination and exposures they encountered during the response and cleanup endeavor.
— Bill Ho Gland, Assistant Chief, Support, Pantex Fire Department

I think it hit the members of the firefighter brotherhood harder than most can imagine because when we watched those towers fall, we knew that there would be several firefighters killed and we felt the pain of loss personally. I have spent a lifetime caring about the well being of people I do not know, and that was what those 343 brave souls were doing that fateful day.
— Tony Dompe, Battalion Chief, Pantex Fire Department

How easily our lives can be taken from us. I will always remember that a lot of people died that day, and I will never forget that 343 firefighters died that day.
— Steve Lasher, Firefighter/Paramedic, Pantex Fire Department

In the aftermath, people from all aspects of life, regardless of race, religion, or political affiliation, reached out to support those in need with complete disregard for their own safety. It was truly a remarkable example of the spirit and devotion of all Americans.
— Jeremy Baker, Paramedic, Pantex Fire Department

What I most remember about that day is the feeling of helplessness. As a first responder, it is the hardest thing in the world not to help when help is needed. I guess we all helped in our own way by ensuring we fulfilled our firefighter responsibilities at home.
— Timothy Hunter, A Shift Battalion Chief, Pantex Fire Department