Brenda Vermillion, Carson County Emergency Management coordinator, said she first thought the June 28 head‑on collision between two BNSF trains was an incredibly loud test shot at the Pantex Plant, but she quickly realized the noise was located at the edge of Panhandle, Texas. “I immediately ran outside the building, and could see the cars toppling and then the explosion,” she said. 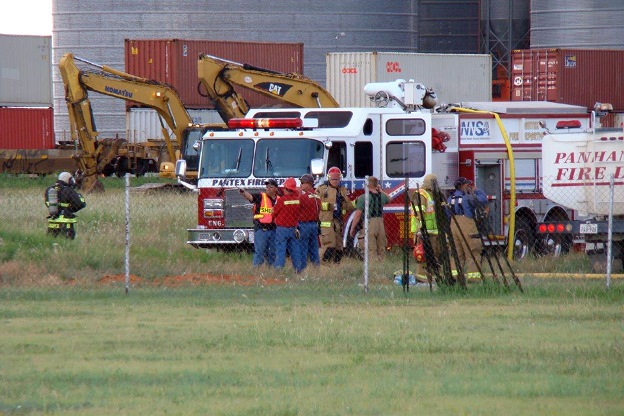 Several Pantex response vehicles that are a cross between a normal fire engine and an engine designed for a refinery fire respond to Panhandle train derailment. Photos taken by Shelly Zimmerman.

Vermillion went immediately to the dispatch office at the Carson County Law Enforcement Center. “We were already receiving 911 calls,” she said. “I told the dispatchers to call everyone and get everything you can.”

Pantex was one of the first calls. “The response from Pantex was fantastic,” Vermillion said.

Pantex dispatched one engine when the alarm sounded, said Mike Brock, Pantex fire chief. Fire department personnel then evaluated the situation and dispatched another truck as quickly as possible. The Pantex response vehicles are a cross between a normal engine found in a city like Amarillo and an engine designed for a refinery fire, Brock explained. Intended to be fed by a high‑pressure fire loop, Brock said the truck had water pumped to it so that it could blast hundreds of gallons a minute on the blaze. One truck, he said, was manned by Pantexans and ran continuously for about 48 hours.

Pantex has to maintain a level of readiness at all times. Brock said they called off‑shift personnel and set up a rotation schedule, which allowed firefighters to rest, clean up, eat and be ready to return if needed while maintaining the site’s requirements.

“Our guys operated flawlessly, and I could not be more proud of them,” said Brock.

Carson County Judge Dan Looten agreed, saying, “We stretched everyone to the limit, but Pantex ran very well while transferring people in and out.” Hundreds of first responders from across the Texas Panhandle were sent to the small town about 10 miles from Pantex.

Pantex also provided an Incident Command Vehicle that served as a command center on one side of the train. Looten explained the length of the trains made it difficult to quickly travel from one side to the other because the railroad crossings were blocked by rail cars. “We were managing two scenes — one on the north side and one on the south,” he said. Pantex’s ICV was vital to the response, he said.

Meanwhile, Vermillion, who was running the response from the county’s emergency operations center, received a call from Pantexan Chuck Rives, who was in the Pantex emergency operations center. Rives, a member of the Pantex Emergency Management Department and team lead for the Consequence Assessment Team, was able to work with Vermillion’s team to identify areas of concern in the trains’ manifests.

“Chuck was fantastic,” said Vermillion. “We couldn’t have done it without him. He stayed on the phone the entire time.” Rives quickly pointed to his co-workers — Brenda Graham, Sheryl Moran, Raj Sheth and Teri Vigil — who sorted through dozens of pages of the trains’ manifest to identify possible hazardous cargo, material properties and toxicity information. “Their work narrowed our focus to just a few dangerous cars so that I could quickly and accurately relay information to Brenda,” Rives said.

The team also provided smoke plume modeling working with the National Atmospheric Release Advisory Center. Knowing what the Panhandle winds were expected to do was vitally important, Vermillion and Looten said. Early in the day, portions of the town were evacuated because of smoke. If the winds changed, driving the fire farther down the train, other actions would be needed to keep the community safe.

Todd Ailes, Pantex site manager, praised the response efforts. He said, “This was a tragic accident that touched the lives of hundreds of our employees who live in Panhandle. Our concern was to help our neighbors in any way possible. Pantex Fire Department, Emergency Management and Communications & Public Affairs personnel worked diligently to provide any services needed by the town, and to provide accurate updates and safe route information to our employees who live in or travel through Panhandle.”

Brock conducted an after‑action review and identified some lessons, including improved interface between the agencies, different types of equipment that could be included on the trucks and the need for new communication equipment that will enable the Pantex team to hear and respond to the other teams.

“Unfortunately, when we get called to do what we are trained to do, it is someone else’s worst day,” said Brock.