Historical Pantex: A village is born

In 1943, housing was at a premium in the Amarillo area. With the war effort and production at Pantex already in full swing and a growing workforce, the need for new homes was obvious. 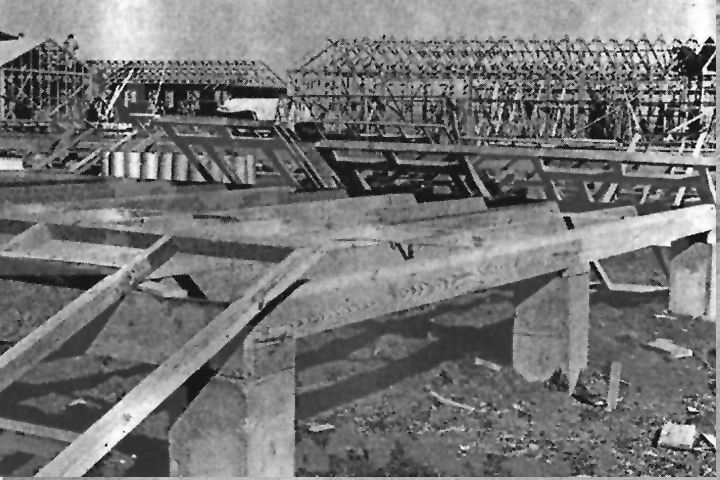 Construction of pre-fab housing units at the Pantex Village.

The National Housing Administration approved 175 new homes to be built in Amarillo for Pantex employees with 3 or more family members, but even that number was not sufficient. So, an additional 360 units were approved including 142 two-room apartments, 128 one-bedroom apartments, 60 two-bedroom units and 30 with three bedrooms.

It was all part of what was then called “Pantex City,” which was located just north of U.S. Highway 60 and Farm-to-Market Road 683. Initially, along with apartment buildings and homes, plans for the city included a shopping center with a grocery store, meat market, fire station, drug store, barber shop, beauty parlor, shoe repair and a tailor shop. There was also talk of a possible grade school with plans to bus students back to town for high school.

Construction was slated for completion in April 1943, thanks to pre-fabricated, mass-production methods. The apartment buildings went up like Tinker Toys with each dwelling having between four to eight apartments. An additional 400 pre-fab homes were soon added, bringing the population of the Pantex Village up to a few thousand. The village grew to 69 residence buildings, a community center and a store to support the approximately 5,325 employees at Pantex working 3 shifts at the height of World War II.

Noted cowboy poet and author Buck Ramsey lived at the village, according to a 1977 article called “Letter from the Panhandle,” which was printed in the Texas Observer magazine. In it, he reminisced about his time at Pantex.

“On the western edge, the government constructed a village; symmetrical rows of buildings so uniform there was a nightly problem of entering the wrong apartment by mistake. The war industry, with its promise of regular paychecks and dwellings with gas heaters and indoor plumbing, lured many families from the hardscrabble countryside. Mine was among them.

“I sometimes slipped through the fences to wander about the forbidden pastures, to lie on my back in the ungrazed grass… and listen to trains rumble away with bombs for Europe and Asia. The war ended with me seven years old. For a couple more years we lived in the village, while the munitions plant deteriorated from the peace. I grew bolder with age and would climb up to survey the area from watchtowers. I walked the barracks porches, and then broke into deserted buildings to steel my nerves against the ghosts inside, preparing myself for some future war.”

Ramsey noted in his writings about the barren countryside and how set apart the village seemed to be from the rest of the area.

In fact, the village was very isolated, functioning as a self-sufficient community. It was 10 miles from the town of Panhandle and accessed only through a perimeter gate that was locked each evening. There were recreational facilities, especially for the younger set, including basketball and tennis courts along with a teen club where dances took place.

To some outsiders, the village was known as the low-income “Cardboard Village” due to the pre-fab materials and walls so thin you could hear neighbors talking.

As a village, there was also a small newspaper called the Pantex Breeze. There were no real village officials because the place was run like a housing project. There was a manager, but no one was ever elected as an official to preside over the village.

After the war, things started to change. In 1949, the plant and village were acquired by Texas Technological College (now Texas Tech University) in Lubbock, and, by the end of that year, the village was turned over to Carson County.

The village was still going strong in the early 1950s. According to housing advertisements in the Pantexan magazine, the rent for a one- to three-bedroom apartment ranged from $33 to $42 per month, with all utilities paid.

In 1968, Pantex Village closed due to the large number of vacancies caused by improved economic opportunities elsewhere and the closing of the Amarillo Air Base in 1967.

Eventually, ads were placed throughout the Panhandle that the buildings were all to be sold at auction. Some of the smaller buildings are reportedly still being used in the town of Panhandle as a storage shed and another as a re-bricked building. Today, all that’s left as a reminder of the early days of the facility and the role it played at the Pantex Plant are a few concrete slabs dotted around the area where the village once stood.

However, the most surprising remnant of the auction is right down Interstate 40 as you enter Amarillo. On the east side of town, you will find one of the most advertised and well visited tourist destinations, the Big Texan Steak Restaurant, famous for its “free 72-ounce steak, if eaten within an hour.”

Bob Lee purchased and dismantled five barracks picked up at the auction and used the lumber to build his restaurant in 1960. Reportedly, most of that wood was lost in a fire in 1976, but the restaurant was rebuilt with the help of 100 of his employees pitching in.

Just like a time more than 30 years earlier… it took a village.