Pantex security police officer Billy Hall was recently recognized as one of the best in the U.S. Department of Energy Complex.

Hall is the latest recipient of the Colonel Sydnor Award, named after Colonel Elliot P. Sydnor, who had a large impact in the modernization of the Savannah River Site’s Protective Force in 1983. Sydnor would go on to help develop the Department of Energy’s Composite Adversary Team. 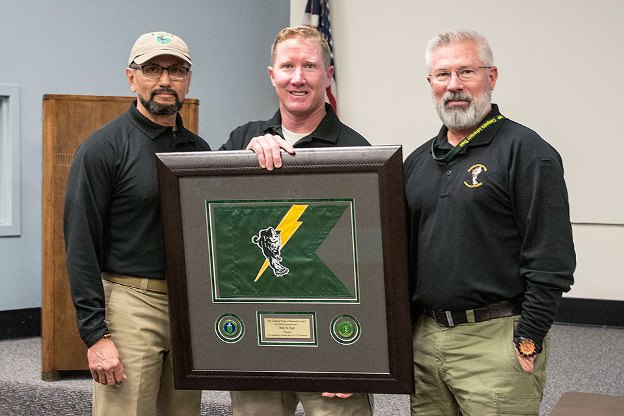 In honor of Colonel Sydnor, the Office of Enterprise Assessments presents the award annually to a CAT member who demonstrates the highest level of physical fitness and tactical proficiency and exhibits qualities associated with superior character and leadership.

“The Composite Adversary Team represents the most talented Security Police Officers across the DOE complex,” Protective Force Deputy Chief Daniel Holmes said. “It is very difficult to be selected to be a part of the CAT program.”

Hall has been a part of the Special Response Team at Pantex for 14 years and is now an SRT captain. He said that the position has given him many tools that have allowed him to be a more effective leader for his team.

“Being selected for this award by my peers — from all of the other DOE sites — as the Colonel Sydnor winner is the greatest accomplishment in my career thus far,” said Hall. “Finally reaching this goal has been very gratifying and required much hard work, patience, dedication and love for what I do.”

The DOE CAT Program’s level of excellence is recognized throughout the worldwide nuclear security community, and Pantex has risen to the occasion before. Hall is the third Pantexan to receive this honor in the last 20 years.