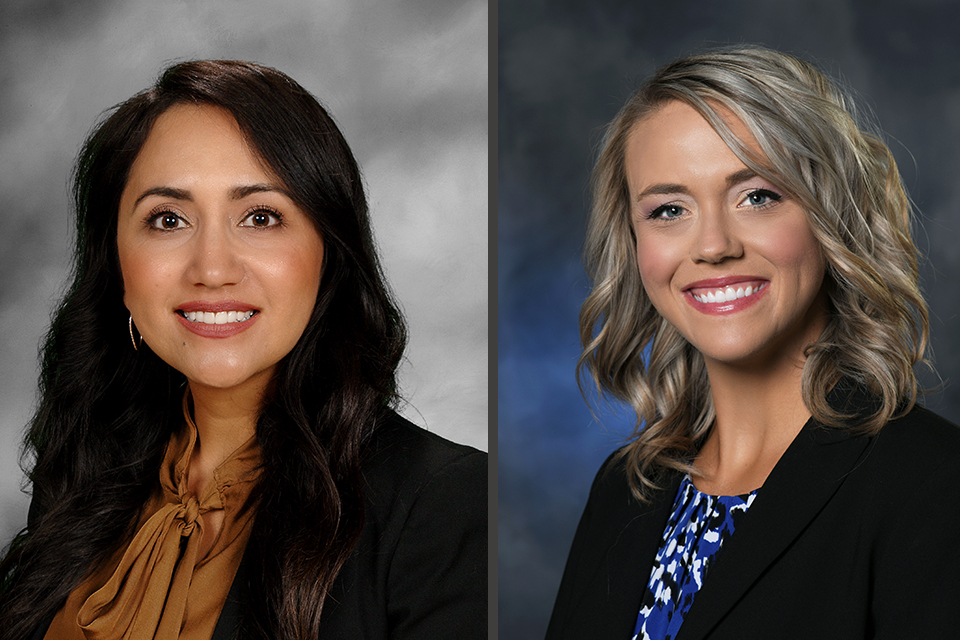 Congratulations to a pair of Pantex employees who are being recognized by the Amarillo Chamber of Commerce with Top 20 Under 40 awards. The awards, presented by the Chamber annually, recognize professionals who demonstrate excellence and bring extra value to the Amarillo community.

Pantexans Brandi Leach, director of Process Engineering, and Lisa Torres, Lean Six Sigma, were chosen to receive the award. To be considered, the nominees, all under the age of 40, must be employed in the Amarillo area and in the same field for at least three years.

Leach has been at Pantex more than 13 years. She leads the organization responsible for developing reliable, repeatable, executable processes for nuclear explosive, special nuclear material, and non-destructive evaluation operations at Pantex.

“Pantex is unlike any other place on earth because you could work here for two lifetimes and never learn it all. I do know I can spend the rest of my life working as hard as possible and never be able to repay what Pantex has provided for me,” said Leach. “I mostly want to continue my career learning about all of the different aspects of the mission and always embody the #TeamPantex attitude.”

Leach and her husband serve as life group leaders through their church, The Church at Bushland. She is also active in their women’s and children’s ministries as well as volunteering as a guest connect team member. Additionally, she supports Snack Pack 4 Kids.

Torres joined Pantex in 2006 after serving in the United States Air Force. She started her career as a security police officer and now serves as the Value Stream Element Team program manager within LSS. In this role, she develops and deploys continuous improvement cross-functional teams focused on identifying and implementing sustained improvements.

“I have such an amazing opportunity to truly partner with folks all across the plant and help teams think through problem-solving, work towards reducing their frustrations, and pursue excellence. I feel completely humbled to have been selected for this award,” said Torres.

Torres is a native of the Panhandle area and is engaged in her community by volunteering at the High Plains Food Bank, Snack Pack for Kids, United Way, Eveline Rivers, and Hillside Church, where she has been the youth ministry leader for years. She is working to help kick off the Pantex Veterans Affinity group and serves as a board member of the Hispanic Chamber of Commerce.

Pantex has been well represented since the Chamber began its Top 20 Under 40 program in 2009. Seven Pantexans have been chosen: Josh Cunningham, Brandy Ramirez, Eddie De Santiago, Ryan Johnston, Christopher Whitmer, Jeremy Baker, and Kimberly Bush. This year, Pantex was the only organization to have dual-award winners.

The Chamber’s Annual Banquet and Business Excellence Awards is scheduled for December 9 when the Top 20 Under 40 recipients will be officially recognized.