Pantex hosts the UK at the High Explosives Workshop

Pantex recently had a British invasion, and it wasn’t the Beatles or the Rolling Stones but the United Kingdom Atomic Weapons Establishment (AWE), participating in the High Explosives Workshop. 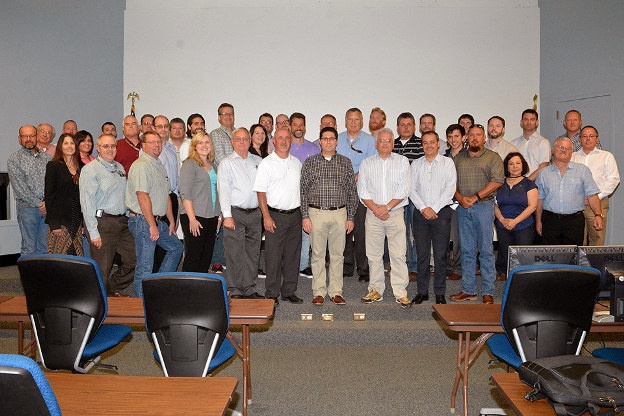 "We have had interactions with Joint Working Groups with the UK, but these only slightly touched on explosive manufacturing," said Barry Hill, senior manager, High Explosive and Materials Testing. "Some joint working groups focused on manufacturing practices, not so much on explosives."

Past interactions have been on Joint Working Groups, or JOWOGs, covering topics such as energetic science and manufacturing practices, and have been greatly beneficial.

"Besides [JOWOGs] being technically beneficial for both the U.S. and UK high explosives community, it’s highly valuable in maintaining and growing the collaborative relationship between new and experienced scientist and engineers on both sides of this long-standing alliance," said Monty Cates, senior director, Explosive Technology Operations.

With a recently expanded treaty, more information regarding explosive manufacturing can be shared between the two countries. Sharing the W76 program and commissioning similar facilities means both sites are facing many of the same challenges. The workshop allowed for discussions about pressing, machining, additive manufacturing, the growing pains that come along with new facilities, and lessons learned along the way.

"This workshop was a great opportunity to collaborate and share practices to improve in safety process and efficiency," said Eddie Yarker, an AWE principal manufacturing engineer. "It was also a great way to gain a wider knowledge and how it is processed here (in the United States)."
Not only was the workshop a great experience between the U.S. and the UK, it was also a valuable learning opportunity for employees at other sites. New employees at LLNL who were not familiar with high-explosives production and Pantex in general were able to learn about some of the processes.

"We have a lot of new staff who aren’t familiar with Pantex or the other sites; we were able to bring some here and let them get an orientation of Pantex as well as the other sites," said Micha Gresshoff, a LANL engineer.

Gresshoff also said that being able to learn the broader mission and learn how production is performed at Pantex are valuable to their staff and their program.

The fruits of the workshop have been plentiful for the UK Atomic Weapons Establishment, according to Mick Parry, the AWE acting principal production manager of explosives, and the momentum gathered from the workshop has carried over to their site. "We have returned with lots of ideas for future improvements and collaborations between our two sites," Parry said.