In honor of Women’s History Month, we will look back at four historical articles about women at Pantex. Part two of the series is from the December 1942 Pantexan.

Fear Turned to Enthusiasm as I Watched Women Load Bombs

I WAS SCARED. When I was asked to come from the downtown employment office to get a story over in Zone 11, I accepted with alacrity. Then I started thinking and the more I thought the more goose pimples popped out on my arms – Zone 11 is a bomb loading line!

Upon arrival at the reservation, I was handed a pass and sent on my mission, accompanied by Bob Canning, Pantexan staff photographer.

Almost before I knew it I was being searched for matches at the line time office. Leaving my purse with a guard, we headed for the change house cafeteria. Bye the time I was fortified with some food I felt more at ease. Also the jovial mood of the employees who were eating helped. They seemed to be having fun.

Then came the real test. We were moving down the ramp closer and closer to actual operations. For six month, I had been signing people up as line workers. Always with the question of danger came up I had assured, women and men alike, that it was very pleasant work and definitely no more dangerous than crossing the street might be. It was all a matter of statistics anyway.

By the time Bob and I, accompanied by D.A. Murphy, superintendent of Zone 11, reached the guard at the receiving room, my feeling of tension had relaxed, but I still had a tendency to hold my breath, walk on tiptoe, and talk in a whisper. After the heels of my shoes were taped, I knew there was no turning back then. The die was cast. I think at first I felt as a parachute jumper must feel the first time he plunges headlong into space.

I had “jumped” and as we entered the big receiving, painting and inspection room my feeling was one of mingled awe and elation. Women, I had been told, were “manning” this line, and there they were – operating hoists, driving a little yale electric truck, in fact doing practically all the work.

They were enjoying their work, too. True, they were taking it seriously. They were people with a job to do and from all reports were doing it well. Here I lost all feeling of fear and became intensely interested. 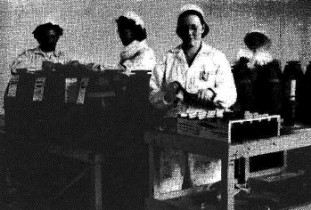 There's nothing to it" say Juanita Fowler, Rosie Barnes and Naomi Middleton (left to right). But there is - plenty!

One of the safety signs I read seemed to typify to me the entire attitude. The sign read “foresight is a darn sight better than no sight.” These people were exercising care and foresight, but they were all at ease and obviously enjoying the work.

There were these women, most of whom I had talked with at some time – housewives, school teachers, cooks, sales girls – all doing their part toward the war effort by making bombs. To some it was possibly “just a job.” To most, however, it was a job to help win the war.

To Jewel Visage, an appealing girl who is a puddler, it’s a way to get back at the Japs.

“I love my job.” She explained, and her bright eyes glistened. “It sure makes you feel good to know that every day’s work helps avenge Pearl Harbor, Bataan and the rest. That’s especially true,” and her face took on an expression of determination, “when you have lost your only brother at Bataan.”

As I went through the line, I was impressed with the fact that so many people were cleaning – mopping, sweeping and washing. Everything was immaculate. This clean-up brigade is leaving little chance for stray bits of explosive dust to be about. They will be some of the real heroes of this war, mostly unsung but definitely appreciated. Even the white coveralls worn by the workers contribute to the appearance of cleanliness.

There is no smoking on the line. The only place employees are allowed to smoke is in the change house cafeteria and there they can’t use matches. Electric lighters are placed about on the walls.

Some of the few men in Zone 11 are the Ordnance inspectors, men who are working under civil service, inspecting the bomb cases when they come in and the finished bombs when they go out.

But back to the women, for this is really their story. They have convinced the men that they can load bombs and load them fast and well, and frankly, most of the men were very skeptical to begin with Mr. Murphy wasn’t for had seen women succeed at this job before. Vilas Bewby, shift B superintendent, was skeptical at first and admitted as much. When I talked with him he was most enthusiastic.

“Given a little more time and experience these women can produce as much and hold their own with any line using only men.” Mr. Newby said.

Mr. Price, an Ordnance inspector, admitted that he too had been very doubtful about using women, but he was ready to “take back” all he’s ever thought. In fact, everyone in authority I talked with was enthusiastic about the work the women were putting out. In the tail pour room, the girls were proud of the output for the day and to me, the uninitiated, it sounded good for us and bad for our enemies. Each day’s output could, well placed, put many strategic bases out of operation.

Ella Lee Singleton of Borger, a former sales girl, and Gertrude Ball, a housewife, also of Borger, were painting caps and liking it.

As I walked into one room, Ethel Carpenter of Lubbock, who had never been employed other than as a housewife, drawing hot TNT in to a container. She was as nonchalant as if she were watching dishes and yet no one sensed that she knew it was smart to talk all necessary precautions.

A sense of awe again overpowered me as I stood in the amatol pouring room and watch one man and five women filling a bomb with deadly amatol. There was so much potential power there than precautions reached a maximum, but again one is conscious of the fact that although these people know it’s smart to follow “all the rules,” they are not afraid.

I wasn’t afraid anymore either. I had great respect for the place, yes, but no fear. As I came to the end of the line, I had a great feeling of pride in these women. They are truly WOWS in more than one sense of the word. They are succeeding and they are turning out many pounds of destruction daily. As I walked contemplatively down the long ramp I thought, “the hand that rocks the cradle is the hand that rules the world.” And never, perhaps more so than now.