In honor of Women’s History Month, we will look back at four historical articles about women at Pantex. Part three of the series is an excerpt from the April 1943 Pantexan.

Matching lipstick and nail polish was a must for the glamour girl prior to Pearl Harbor. But, only a few months later, the most glamorous girls in the country were chucking those same hands into cotton work gloves, hiding their Joan Crawford lips behind weird looking masks, and exchanging their smart costumes for the uniform of the WOW. 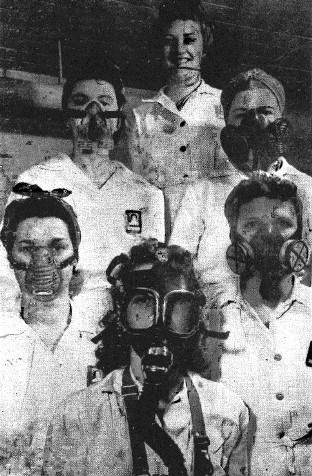 Women are in the war with both feet and to do their production front jobs efficiently, without accident or injury, they must dress safely and work safely. Keeping these precautions constantly in the minds of women workers is one of the big jobs of safety engineers in war plants throughout the country. And, Pantex is no exception.

As a matter of curiosity, safety engineers were asked to break down the safety records of men and women workers at Pantex on a comparative basis. The picture which resulted was so alarming that even a casual glance at it should be enough to startle the women out of their lethargy and keep them on the alert from now on.

From September 1, 1942 to April 1, 1943, women accounted for 15.56 percent of the total hours worked at Pantex. During the same period, 23.58 percent of all accidents and injuries befell this same group of female workers. (The figures quoted to not apply to the employees of the administration, employment and hospital buildings since their exposure to hazards is comparatively slight.)

It is easy to understand why the ratio of mishaps to women was high in the early days of the plant’s history. Most of them were housewives, school teachers, etc., and very few had experience as industrial workers.

But women are quick to catch on. During the month of February, they accounted for only 16.61 percent of all accidents and injuries despite the fact that their percentage of hours worked remained approximately the same, 15.11 percent of the total. They had to learn how to do their jobs safely and realizing the danger element in their work, they were careful to use the protective equipment provided them.