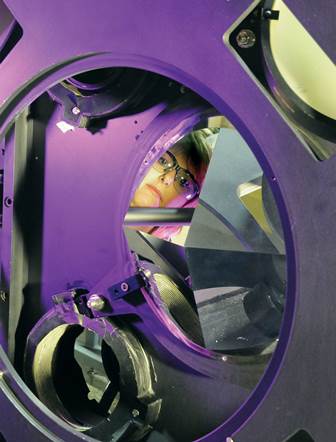 Dana Landrum, Quality Assurance technician, is reflected in the four-sided pyramidal mirror of CoLOSSIS, a computed tomography imaging system unique to Pantex and used to nondestructively determine the integrity of pits.

What does it take to look inside the core of a nuclear weapon? Start with four cryogenically cooled astronomy cameras capable of 8,000 by 8,000-pixel images, one four-sided pyramidal mirror and a burst of photons generated by an X-ray source nearly 100 times more powerful than a medical computed tomography (CAT) scan, and you have the world’s only computed tomography imaging system used to determine integrity of pits – CoLOSSIS.

As many as 1,800 images of each pit are taken over multiple days at Pantex using the Confined Large Optical Scintillator Screen and Imaging System, or CoLOSSIS, to nondestructively determine if they will function as expected. A pit is a component made of plutonium metal and is the heart of a nuclear weapon. The imaging is conducted on surveillance units as designated by the National Laboratories.

Prior to the introduction of CoLOSSIS three years ago, film was used for analysis of pits, which offers only a two-dimensional perspective. But confidence in the nation’s nuclear stockpile required more efficient technology.

The 32,000-pound, lead-shielded CoLOSSIS is operated by highly trained quality assurance technicians whose background stems from the medical or industrial non-destructive evaluation fields.

It takes an average of 15 to 18 hours for CoLOSSIS to work its magic, during which time a component rotates approximately 0.2 degrees for each image until it has rotated 360 degrees to capture an entire data set. During each rotation, the X-ray source known as a linear accelerator, or LINAC, produces photons collected by a scintillator that converts the photons into green light used to create a digital image. Collimators direct the energy, focusing the X-ray beam onto a pyramid-shaped mirror that reflects the light into the cameras, which in turn collect the data.

Data is then transmitted to Lawrence Livermore National Laboratory, designer of the system, and Los Alamos National Laboratory. The labs use computer code to reconstruct the analyses by stitching images taken by the four cameras into one. This offers scientists a three-dimensional view inside the nuclear weapon’s core that they can literally “walk through” to detect manufacturing flaws and the effects of aging.

“This system represents a successful collaboration between Pantex and the Design Laboratories, despite the technical challenges that are to be expected of a one-of-a kind system like CoLOSSIS,” said Gerken.

Designs for a second CoLOSSIS system are in the works and equipment is being procured, Gerken said. “Once operational, this system will give us a second line to aid in workflow throughput and could possibly provide capabilities for analysis of different components,” he said.