This year, the B&W Pantex Plastics Shop began formulating a new method of mixing polyurethane molded parts for explosives, coatings, seals, cushions, tool covers and more. The old method consisted of mixing the components in a generic “ice cream bucket.” After the correct amounts of materials were mixed together, the mixture would be carefully injected into the mold to form the needed part.

At first glance, this process appears simple, but it took approximately two to three hours to make one mold. In addition, the cleaning process could expose people to hazardous chemicals. Some of the molds formed bubbles and voids after the mixture was injected. After rising concerns about the old mixing method, the Plastics Shop knew that it was time to start researching better
alternatives.

Months were spent researching solutions, and the group discovered a revolutionary type of mixer. This eco-friendly system, known as the dynamic mixer, resolved all of the previous problems with the ice-cream-bucket method.

When the dynamic mixer arrived in February, the Plastics Shop teamed with West Texas A&M University (WTAMU) to give students the opportunity to be engaged with this research. The mixer is residing at the university for research purposes, and Stephanie Steelman, a polymer chemist in the Explosives Technology Division, is the project manager and principal investigator for the
WTAMU collaboration.

Devin Cook and Matt Dolezal, both mechanical engineering majors at WTAMU, have been working on this project since the beginning of this year.

Cook, a senior, has been working on the mold designs and optimizing software specifically for the dynamic mixer. “Engineering today is mainly done on computer, and having knowledge of all this software and technology will benefit me in the future,” said Cook.

Dolezal, who graduated from WTAMU in May, has been working with the mechanical engineering and chemistry research of the project, although both work together on all areas of the project. “I really enjoy how much I’ve learned from this experience; I think the knowledge and
skill sets I’ve gained will help me greatly starting my career,” said Dolezal.

Using the dynamic mixer, it now takes only a few minutes to produce each mold. There is minimal cleanup with no exposure to chemicals and there are no bubbles within the mold. The largest mold, which takes about five pounds of material, requires only three to four minutes to fill.

The project will be finished later this year, and the mixer will reside at Pantex starting sometime in March. “The new mixer will save the Plant money in the form of time, raw materials and personnel resources,” Steelman said. 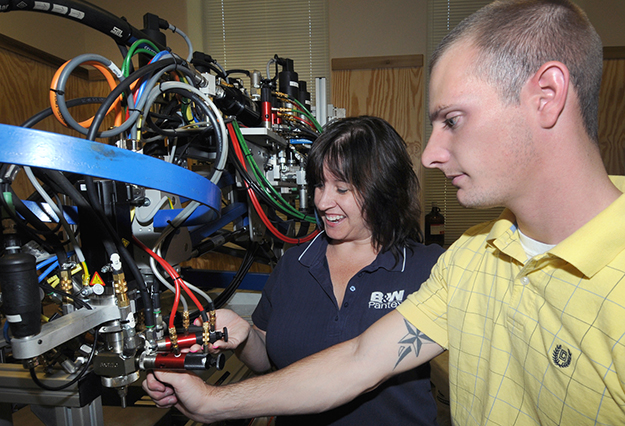