With nearly three-fourths of the workforce at the Pantex Plant only five years away from retirement age, Consolidated Nuclear Security (CNS) has put a heavy focus cultivating our future workforce.

Data from the U.S. Bureau of Labor Statistics (BLS) states that employment in occupations related to STEM – science, technology, engineering, and mathematics – is projected to grow to more than 9 million between 2012 to 2022. Something that we know first-hand.

In 2015, CNS donated $10,000 to Bushland Independent School District (BISD) to help them kick-start an initiative to create a hands-on, high-tech STEM educational program.

The district knew there was a need to provide more STEM-related education. They decided that the best direction to implement this initiative was to form elementary, middle, and high school teams that would participate in FIRST® (For Inspiration and Recognition of Science and Technology), international robotics competitions that drive students to research and explore real-world scientific and engineering challenges. 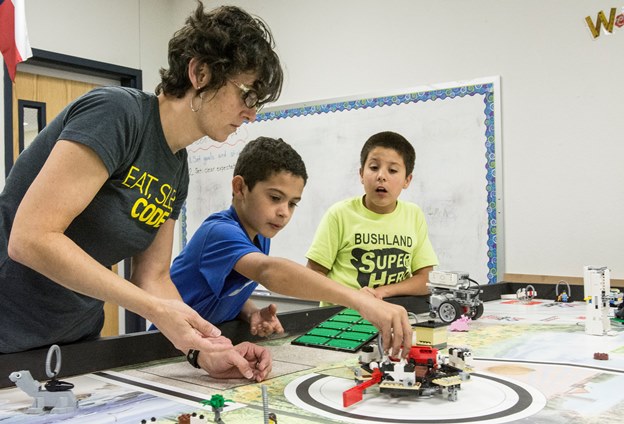 The teachers responsible for building this multi-level robotics program agreed upon a plan that no one saw coming. The popular choice would have been to use the funds to immediately support the high school STEM program, but the teachers chose to take a different approach. One that would build a solid foundation for STEM education for years to come.

Jessica Patterson, who runs Bushland Elementary’s Einstein Lab, along with Melissa Cochran, who handles the computer lab, and Christina Butler, who teaches special education, have other daily responsibilities but were willing to devote nights and weekends to cultivate a program that would enhance students’ learning to the next level.

After hosting a “Get to Know Robotics Family Night,” students organized teams to create their own robot and research presentation. By May 2015, BISD had 11 FIRST LEGO® League Jr. (JrFLL) teams, seven FIRST LEGO League (FLL) teams, and one FIRST Tech Challenge (FTC) team. The question now was: How can we serve more than 100 students without sending every one of them to Dallas to compete in a tournament?

“We saw the need for all students in the Texas Panhandle to have a local tournament to compete and celebrate learning,” said Patterson.

Currently, TexPan robotics is working with FIRST to become an official region for students in the panhandle. The 2015 tournament champions were The Purple Perspicacious Pandas, a group of six middle school girls who defeated their competitors to receive an ACE (Advancing to Championship) certificate allowing them to travel to Dallas to compete in the North Texas FLL Regional Championship in February 2016.

After tournament season ended, the Bushland Robotics teachers (otherwise known as the LEGO Ladies) devised a plan to rollout a “WE Do STEM” and EV3 robotics academy. The “WeDo STEM” academy serves students in kindergarten through second grade, and EV3 academy serves third through eighth grade. This six-week robotics academy was held outside of normal school hours and began teaching the basic skills of building and programing a robot. Later, academies addressed programming sensors and precision programming.

“We chose to keep to six-week learning programs because the short learning process engages kids to learn rather than just show up for a club meeting,” explained Patterson.

The academy was full within a matter of minutes of registration opening, showing the teachers that there was obviously an interest by the students and it was backed by their parents. The spring academies sparked such an interest in the students and their parents, that BISD now has seen a growth in teams to 11 JrFLL, 10 FLL, and two FTC teams. An outside interest has added two additional FLL teams from the local homeschool community and from the Boy Scout council.

“Without the donation from Pantex, this program would not have been possible,” said Patterson. “The students’ learning is so rapid that we are moving faster than we could have imagined and these resources provided by Pantex are an essential part to our success.”

Pantex provided BISD with another $10,000 contribution for the 2016–2017 school year in an effort for them to expand their program to the FTC for 7–12 grade students and eventually a FIRST Robotics Challenge team for 10–12 grade students.