Program has saved 800 tons of paper from landfill 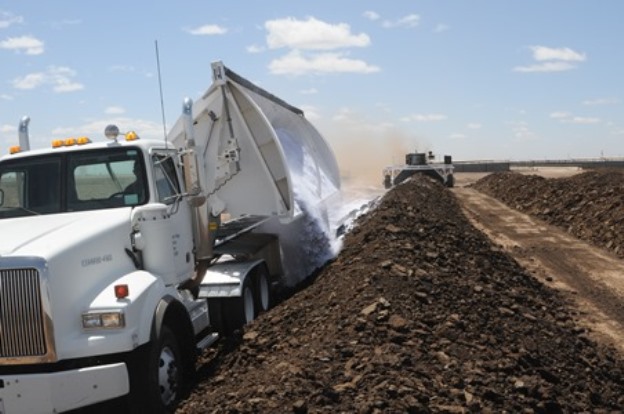 Every year, the Pantex Plant uses thousands of pounds of paper that must be destroyed to protect sensitive information. For the vast majority of that paper, a trip through the shredder is not the end of its purpose, but only a beginning.

After a few weeks composting in a pile of feedlot waste, the paper goes on to help fertilize thousands of acres of crops across the Texas Panhandle and beyond, beneficially reusing a valuable resource and saving massive space in the landfill.

“This program goes hand in hand with our commitment at Pantex to be good stewards of the environment,” said Jimmy Rogers, Waste Operations Department manager at Pantex. “Reduce, reuse and recycle has become a way of life for us, and this is a great example of that effort.”

The idea to use waste paper for compost sprouted about 10 years ago when the Waste Ops Department was looking for a better outcome for the paper than burying it in the landfill. Traditional recycling was considered, but it can be expensive and difficult to find a recycler to take paper shredded as finely as security requirements at Pantex mandate.

One of the Waste Ops employees came up with the idea of combining the paper waste with another waste stream that is plentiful in cattle country: manure.

“It turned out to be a perfect solution,” said Bill Allen, section manager for Waste Ops. “We’re fortunate to live in a part of the country where we have abundant supplies of the ingredients for composting like this.”

Pantex ships a load of waste paper every week or two to Shannon Leavitt, who owns Natural Fertilizer Company in Wildorado. Leavitt’s company takes cow manure from a pair of feedlots in the area and spreads it into rows in empty fields, where the paper is mixed in.

After a few weeks of turning, compost is created in a process very similar to home composting that many people do in their backyard. Heat and bacteriological action break down the ingredients and sanitize the mix, creating a perfect fertilizer source that Natural Fertilizer sells and spreads across fields of crops ranging from vegetables to corn and wheat.

Leavitt said the compost provides a valuable mix of fertilizers to farmers across the area, although he ships to customers as far away as New Mexico and even Arkansas. The manure provides an environmentally friendly source of organic fertilizers nitrogen, phosphorous and potassium. The paper breaks down into a good source of carbon.

“It’s a tremendous process,” Leavitt said. “That’s 100 percent waste material that we are converting to a very viable and beneficial material.”

Since the program started in 2003, Pantex has shipped 871 tons of paper to Natural Fertilizer. That material has not only been used to sustain the area’s abundant agricultural products, it has been spared from the landfill. Pantex pays Natural Fertilizer around $1,500 a year to take the paper, an amount that is slightly less than the cost of putting it in a landfill.

The program is all part of an ongoing effort to reduce waste streams from the Pantex Plant, which has become a huge point of emphasis within the Department of Energy Complex. This year, Pantex has diverted 89 percent of its construction waste and 65 percent of its municipal solid waste from the landfill.

Through pollution prevention efforts, Pantex has reduced hazardous waste generated at the site by 99 percent since 1987.

“These efforts help us meet goals established by the DOE, but we do this because we want to protect the environment,” Rogers said. “We live here. Our families live here. We feel an obligation to make sure we leave a cleaner environment to our children and grandchildren.”