Though some of the faces have changed, there’s one thing that hasn’t. If it’s lunchtime at Pantex, there’s a game of Spades taking place. What started as a way to pass the time in the cafeteria during lunch is a ritual for Andy Marshall, Dale Moon, Jimmy Myers and Kevin Brown, whose job it is to bring the cards. 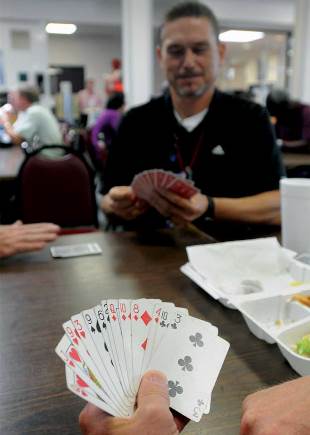 “It’s fun. I see it as a break in the action of the job. Kinda like recess in elementary school,” said Myers, a technical advisor and 33-year Pantex veteran. Eight hands are played each day with scores recorded in a log book. Why Spades? “It’s easy to play and eat at the same time,” said Myers. “Not much strategy involved.”

“People play until they retire, leave or are unable to play,” explained Myers. “We then usually let the first alternate in the game replace the starter.” At times, players leave Pantex to work elsewhere and then return to the Plant, as is the case for Steward and Brinson. “They are waiting for their chance to be the starting pitcher, rather than a bullpen ace,” said Myers. 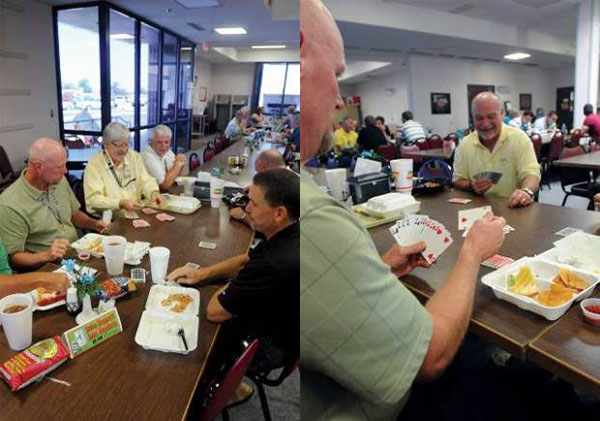 There’s not much Kevin Brown, program manager and 18-year Pantex veteran, doesn’t like about the lunchtime card game. “The camaraderie and competition, with a little trash talking, allows us a break from the hectic day, even though for just a short period of time,” he said. “It can be a stress reliever.”

Special rules keep the 40-year-old game interesting. One is that no matter how far behind you are, you can win in the last hand. But serious business it isn’t. “We usually remember everyone’s most ignorant play and then keep reminding them about it later,” said Myers.

Among Myers’ favorite memories is the time then-General Manager Denny Ruddy approached the group to ask what they were playing. “We all thought, well, I guess this game has come to an end. But, he was truly interested and began making fun of how Steward was playing his hands.”