The Pantex Christmas Project started in the late 1950s, and although it has gone by a few different names and has assisted needy families in various ways, one thing has remained the same: Pantexans’ desire to help others. 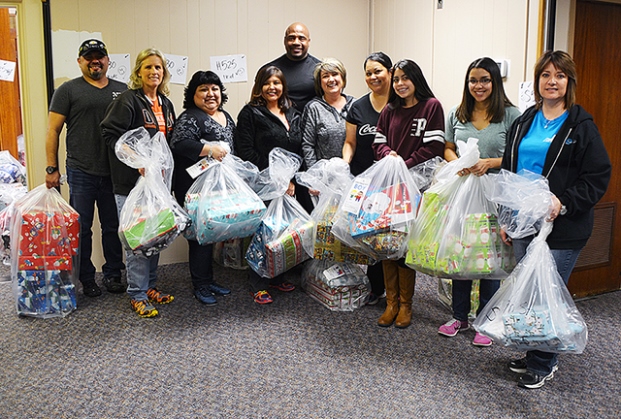 The project started when employees at Pantex thought they could pool the money they would normally use for buying each other gifts and instead buy toys, food, and clothing for families who would otherwise go without. Unlike other angel tree programs, Pantexans have the opportunity to adopt elderly as well as children.

“This year we worked with Family Support Services to help bring Christmas to those who might not otherwise get anything,” said Lennet Hernandez of Pantex Safeguards and Security. “Often the children have been uprooted from violent homes and usually do not get to bring anything with them. They are frightened, traumatized, and sometimes have been abused. We want to provide a great Christmas for them; for many it’s the first peaceful holiday they have ever experienced.”

The giving tradition continues; this year all 221 angels were adopted in less than 36 hours. Once an angel is selected, the fun begins. Take for example General Stores in Building 16‑19; they found a way to raise money for the gifts and have some fun at the same time.

“We had a pumpkin carving contest, a hot sauce taste off, breakfast casserole cook off, and an ugly sweater contest,” said Trey Gillman, a Pantex operations manager. “While these events are always full of cheerfulness and the spirit of giving, they can get very competitive as well.”

The idea of having fun events to raise money came last year, and it was so successful that this year they were able to raise $700 and adopt six angels.

“Whether it be an elderly person in a nursing home with no family to spend the holiday with, or a child whose parents are unable to provide gifts, we are fortunate enough to work at Pantex and be in a position to help these people out,” Gillman said.

Whether Pantexans bought a gift for a child or a nursing home resident, one thing is certain: Those gifts will bring a smile to many faces this holiday season.