Day in the Life of a Pit

With underground testing long out of the question, the health of the country’s nuclear weapons stockpile relies in part on pit testing conducted at Pantex. At Pantex’s Special Nuclear Material Component Requalification Facility, pits — a nuclear weapon’s heart — are probed for analytical data. 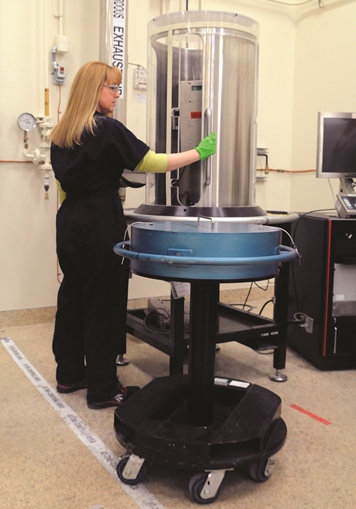 “When we obtain a pit, it is unpackaged, cleaned, visually inspected and weighed, and a leak check is performed to ensure it’s sealed,” Special Nuclear Materials Department Manager Randall Hodges said. “That’s when it goes to either the Laser Gas Sampling System for surveillance or the integrated pumpdown and fill station for requalification.”

Akin to a blood draw, the Laser Gas Sampling System enlists a laser to drill a hole into the pit tube the diameter of a human hair to obtain a small amount of gas. The same laser welds the hole shut, and the gas sample is transported to the gas lab where a determination is made about its composition.

A second process is comparable to a blood transfusion. The integrated pumpdown and fill station’s high‑energy laser drills a hole in the pit tube, the gas is replaced, and the laser welds the hole shut. These gas samples also head to the gas lab for analysis.

Both systems support the overall Pantex mission. Requalification allows a pit to stay in the stockpile; surveillance involves obtaining information on a pit, then sharing it with the national laboratories to help certify to the President that the nuclear weapons stockpile is at an extremely high level of quality.

“Our most important work involves the surveillance and reprocessing of nuclear material for nuclear weapons,” David Cole, Weapons Operations director, said. “It has to be very high quality given the lack of underground testing. We can’t build new, so we’ve got to take components that were not designed to remain in the stockpile this long and make them last longer.”

A pit’s visit to the Special Nuclear Material Component Requalification Facility involves much more than “blood work,” and the entire process can take four to five days. Microfocus X‑ray ensures that the pit’s weld is acceptable. Then, it revisits both the weigh station and leak test station.

Additional steps include the dye penetrant station, coordinate measuring machine and Tube Evaluation Test System. The pit is then re‑marked and its condition documented at the pit imaging station. Finally, it is repackaged and sent back to the warehouse for future use in another weapon.

“The laser in LGS2 is a newer technology system that runs off laser diodes rather than flash lamps, and produces more consistent operation as it ages,” Nate Davis, former Special Nuclear Materials Technical Department manager, said. “It also allows the use of fiber transmission of the laser rather than a complicated mechanical/optical train, which alleviates maintenance time involved in aligning the optics.”

A second requalification process, to be designed in house, is expected to be installed at the end of fiscal 2016.