Pantex and West Texas A&M have been working on bobcat research since 2009. Actually, this work has since transcended from "research" to "management" of the cats. Sunday, the work made the Amarillo Globe-News. 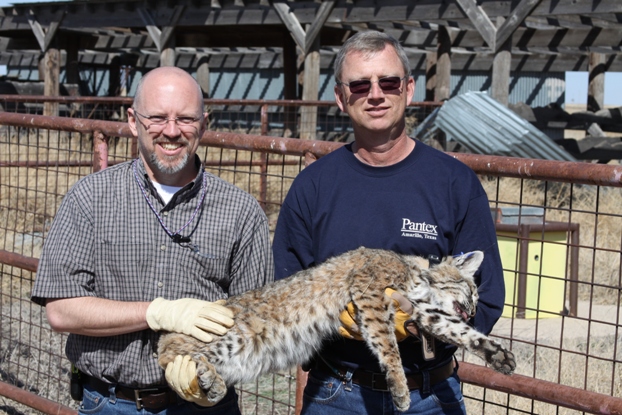 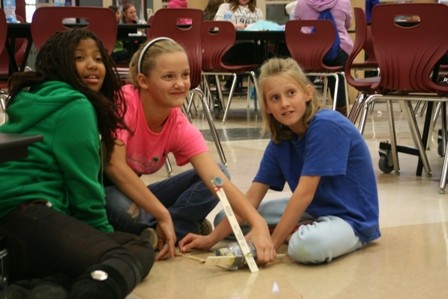 A group of young women engineers from Pantex spent their Saturday putting on an annual engineering workshop, known as S’More Engineering, for Amarillo-area Girl Scouts.

The engineers helped the Girl Scouts with several projects that illustrated engineering concepts, such as an egg drop that had the girls building a structure that would allow an egg to survive a one-story drop and an Angry Birds activity that saw them build catapults and other launching devices that re-created the popular mobile game.

The program started last year as a way to generate interest in engineering among young girls and encourage them to pursue careers in technical fields.

“It is very encouraging to see so many girls come out and take an active interest in engineering,” said Pantex process engineer Savannah Gates, who helped develop the Girl Scouts program. “These activities are so much fun, but they also teach important lessons that we hope will be valuable in their lives.”

B&W Pantex supports numerous activities throughout the year designed to encourage a love of science and math among area youths.

This year’s event continued the trend of increasing attendance, up by 50 percent over the last workshop, and interest by Girl Scouts, including several parents who participated in the event.

“It’s such a great opportunity for the girls to meet the Pantex engineers and work with them on these projects,” said Kathi Schutz, area director for the Girl Scouts of the Texas Oklahoma Plains. “They’re very hands on, and the girls see them as mentors that are taking an active interest in them.”

Wild Pantex – The Scoop on Pantex and Wildlife

Recent media coverage on our wildlife work at Pantex elicited the following comment in the Amarillo Globe News. “That’s cool….but, I don’t get the connection between what Pantex does and them studying birds.” Well, that’s pretty easy to answer so I’ll do it here.

Good Stewards/Good Neighbors
First off, think U. S. Department of Energy’s (USDOE) Rocky Flats facility in Colorado. Many of the directives that flow down to my management and division stem from environmental issues at Rocky Flats: the resulting public perception, the reactions that followed, and then the eventual closing of that facility – forever. Trust me, the Pantex Plant, its employees, and the surrounding communities want no part of something like that. We want to be here for the long run, continuing our roles in national security and our place in the local community. Thus, concern for, and protection of the environment is embedded in our company’s strategic plan, our environmental policy, and in our nuclear safety culture.

The Pantex wildlife program operates within a rather broad directive from USDOE, “Land use planning and stewardship responsibilities will be implemented consistent with the principles of ecosystem management and sustainable development.” What we take out of this, and additional guidance, is that we are to use state-of-the-art management practices to manage and maintain our shortgrass prairie and playa wetland-centered ecosystem and the native wildlife resources that inhabit it. This factors into all the various parts of our program including nuisance animal management.

Although it is easy to think that research goes above and beyond that basic mandate, research is in order when questions are needed to address management needs. Research contributions and collaborations help make us good stewards and neighbors, and USDOE has been very supportive of our efforts.

Other Supporting Directives
The Executive Order, Responsibilities of Federal Agencies to Protect Migratory Birds, came about in 2001 and gives us a strong driver to manage habitat for birds, conduct research, promote birds through outreach, and participate in partnerships that conserve or study birds. Additionally, much of our current work on birds is part of the monitoring that we promised the U. S. Fish and Wildlife Service and Texas Parks and Wildlife Department that we would perform, as responsible stewards, in association with the Pantex Renewable Energy Project.

Thus, our research collaborations, and the resulting opportunities for sharing of information through publications, presentations and interactions with the media are all supported by agency directives, and the kind of responsible stewardship that we want to continue to display into the future.

Please feel free to share this link with others who enjoy wildlife or appreciate entities that take great strides to contribute to wildlife conservation. 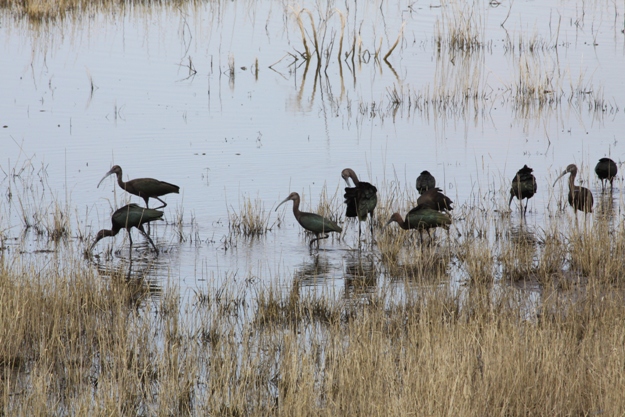 These white-faced ibis take time to feed on aquatic invertebrates in Playa 1 at the Pantex Plant.

Frequently, after checking my e-mail real quick in the mornings, I’ll venture out in my truck to check various trapsets that we have set for bobcats. On October 4, I made the first of five scheduled stops. I walked around the end of the treerow and made my way to the first trapset which consisted of two box traps.

Hmm, both trap doors were closed. Trapping had been slow all summer, so I wondered if it was the wood rats or striped skunks that we had been catching at this site. Not this time! A half-grown bobcat kitten peered out from one trap, and another kitten from the other trap. I then walked on down the treerow to the other double-trapset. The door was open on the first trap but, COOL, there was another bobcat kitten in the second. I returned to my truck and called my collaborators at West Texas A&M University (WTAMU) to get them on their way. I, then, headed out to check the remaining trapsets at other locations.

Even though bobcats had previously been recorded in the surrounding counties, the appearance of the mother of these kittens’ in 2006 was the first documentation at Pantex. By 2009, two bobcats with kittens were documented and Pantex contracted with Dr. Raymond Matlack with the Department of Life, Earth, and Environmental Sciences at WTAMU to collaborate on trapping, marking and tracking these cats on and around the facility. Since then, dozens of students, including Graduate Student, Lena Thurmond, who’s Master of Science Thesis will be based on the cats, have assisted in over 30 captures of bobcats on and around Pantex.

Back to the present….

As the WTAMU crew arrived an hour later, I joined them to take part in the processing of the cat. Today’s crew is team leader, James Skaggs, along with Erika Knowles, and Dustin Henderson. Laura Bailey with the Pantex Public Affairs Office joins us to take some photos.
Moments later WTAMU pokes the first kitten with a jab stick loaded with sedative and we back away, waiting for the sedative to take effect. Ten minutes later and its “bobcat down,” and time to get busy. The cat’s eyes remain open, but its body is limp. To combat the drying effects of the sedative we, periodically, use our hand to “blink” its eyes, while keeping its eyes covered in-between “blinks.”

I snap photos and help occasionally as WTAMU goes through the process:

Once finished, we place the sleeping cat back in the trap to recover for a couple of hours. Then it is on to the next cat, and then the next. All-in-all a good day; the trapping and marking of two female and one male bobcat kittens, ranging in weight from 8-11 pounds. That places them at about half the weight of their 20-21 pound mother that we have captured and weighed on three occasions.

Such is the normal processing of a bobcat. An adult cat would have received a GPS tracking collar, enabling us to track it and map its home range and habitat use. Perhaps, we will catch these guys again and they can be tracked like other adults.

The WTAMU crew hangs around for a few hours and lets the kittens out of the traps at about the same time. They’ll join up with their mother and continue to roam our Wild Pantex. 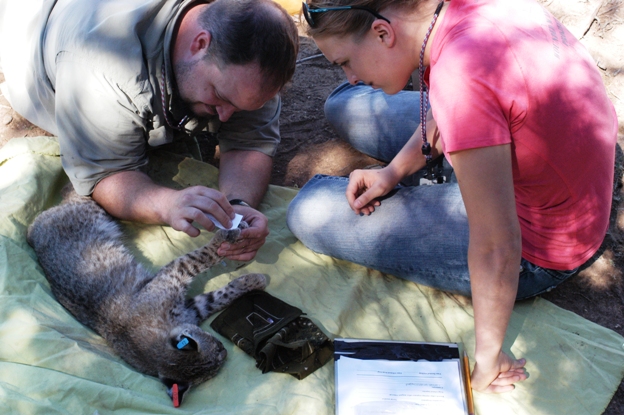 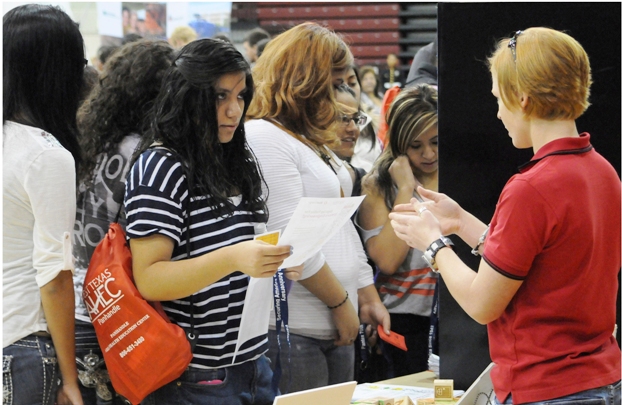 Pantex process engineer Savannah Gates talks to Amarillo area high school students about engineering at the Top of Texas Career Expo. Gates used a variety of puzzles to teach engineering principles to students who might be interested in the field. Pantex professionals from various specialties, such as IT, engineering and security, supported the career fair, educating more than 900 juniors and seniors about career options at Pantex. 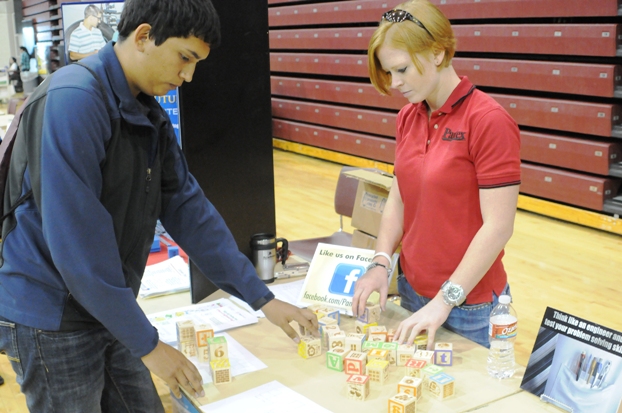