Most of us who were raised in Texas and the adjoining states in the early and middle portions of the 20th Century have fond memories of the Texas horned lizard, which we called the horny toad. This flat and well-armored lizard was quite abundant in my hometown of Dalhart, Texas. As a child, I spent many an hour searching for them, studying them a few minutes, and then allowing them to continue on their way. Now, less abundant or even absent from much of its original range, this species of horned lizard is protected in Texas and is the subject of many research questions which will hopefully comprise the pieces to the puzzle as to why this species has declined in many areas.

The U.S. Department of Energy/National Nuclear Security Administration Pantex Plant where I work happens to still have a good population of Texas horned lizards. In fact, I find they are still abundant in grassland areas of this part of the state. As the Pantex wildlife biologist (and with proper permits in hand) I have had a great opportunity over the last 18 years to continue to play with these lizards. Better yet, one of the first two research projects that we have initiated here at Pantex was one working on Texas horned lizards and other herpetofauna (reptiles and amphibians) in collaboration with Dr. Richard Kazmaier of West Texas A&M University. We studied this reptile on site for nearly a decade, even using tiny radio-transmitter backpacks for tracking and determining its habitat needs here in the shortgrass prairies of the Southern Great Plains.

One very interesting aspect of our research was a contradiction that we found relative to previously known research on the lizard’s diet. Diet analyses of a large sample of Texas horned lizards at Pantex and another research site studied by West Texas A&M indicated that Panhandle lizards are more generalists in their diet than horned lizards from other areas. These lizards are widely known to primarily consume several species of the harvester ant, most notably the red harvester ant (Pogonomyrmex barbatus). Although various species of ants still comprise the majority of their diet, Panhandle horned lizards tend to consume more of the much smaller species of ants, as well as other invertebrate prey.

The fact that these “northern” horned lizards are smaller than those in the rest of the state likely plays a role in this difference of diet. The energetics associated with the smaller body size allows them to subsist on smaller invertebrate prey. Or is it the opposite? Does the small body size come from the lower dependence on the large harvester-ant species? Although harvester-ant colonies may still be an important component of their habitat across their range, being more of a generalist allows the lizards in the Texas Panhandle to survive should harvester-ant colonies be less abundant than in other areas or between years.

Please feel free to share this link with others who enjoy wildlife or that appreciate entities that strive to contribute to wildlife conservation. 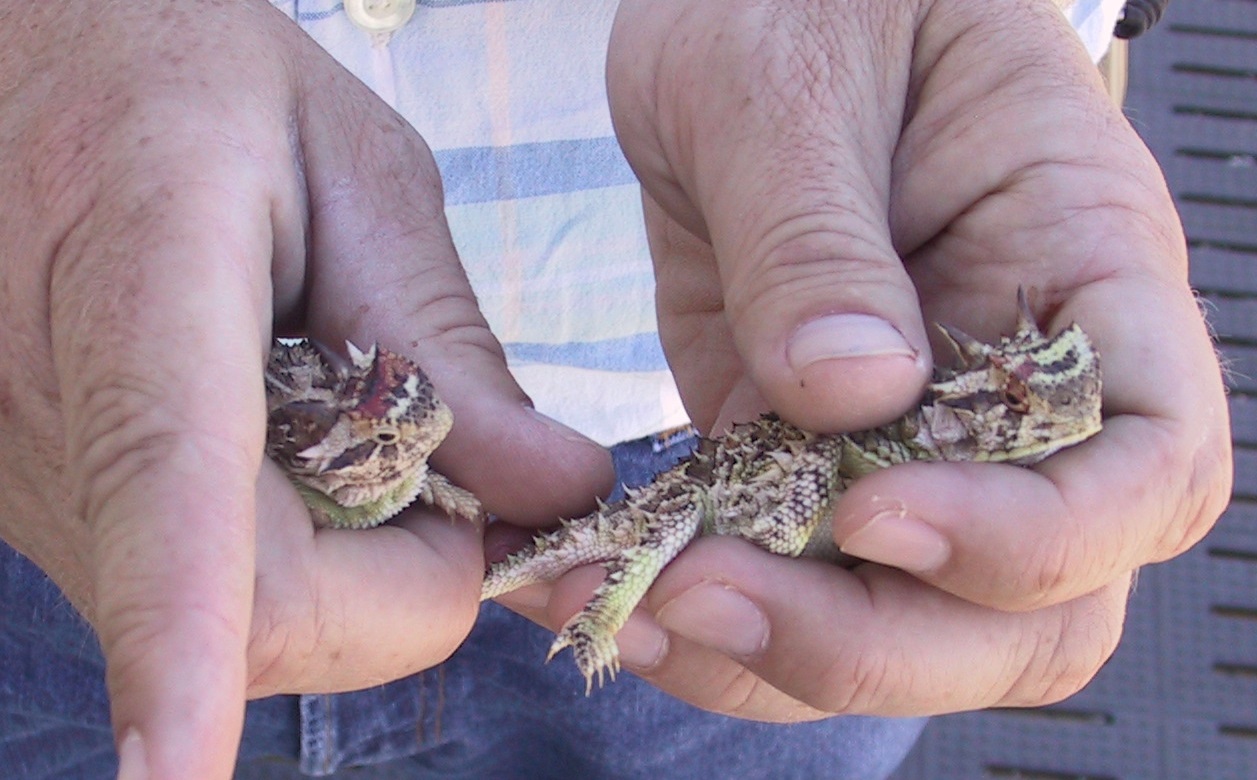 Photo: Both of these Texas horned lizards exhibited blood-squirting behavior (from the eyes as a defense strategy) upon capture as part of research on the U.S. Department of Energy/National Nuclear Security Administration Pantex Plant. Pantex and West Texas A&M staff possessed the required permits to capture and handle these lizards for research purposes.
Tags:
Wild Texas
Jim Ray
Texas Hord Lizard