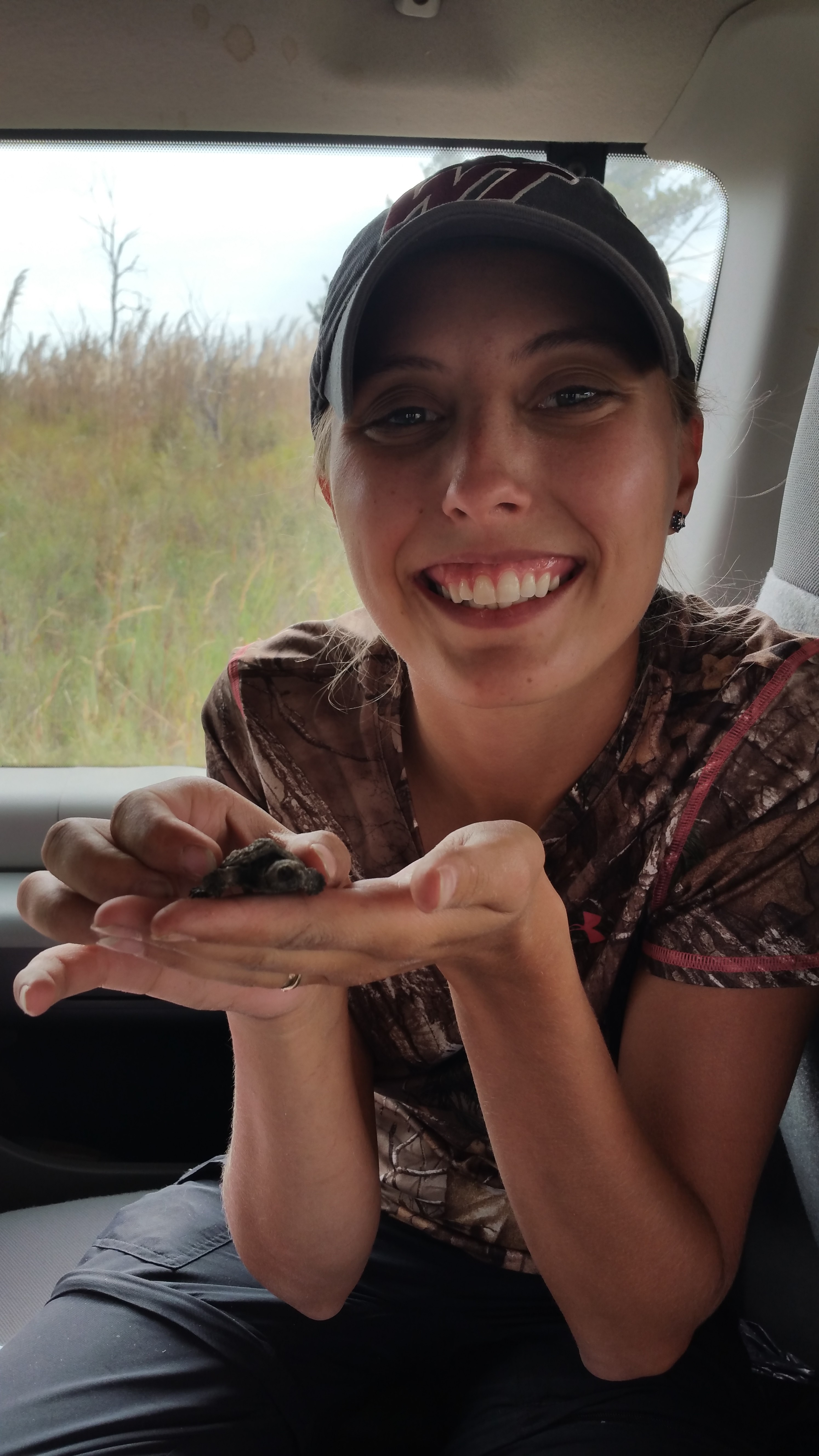 My name is Kimberly Newton and I am excited to be writing you as a recent graduate from West Texas A&M University with a Bachelor of Science in Wildlife Biology. I have the fortune to be chosen for one of Pantex summer internships, and shadow Wildlife Biologist Jim Ray. My main topic of interest is with reptiles and amphibians, but I have a passion for all wildlife including mammals, birds, fish, and invertebrates. I enjoy participating in volunteer work and outreach events, and I have even served as an officer for the WTAMU student chapter of the Wildlife Society. The majority of my experience is with small mammals and birds, but I also have some experience surveying for and marking yellow mud turtles, as well as copperheads and other various snakes of the eastern Texas region.

I am new to the team, however, I am not new to Pantex. Workers here have probably seen me around, wearing knee-high snake boots and a WT baseball cap. I have had the privilege of working for almost two years on a research project that measures the effects of wind turbines on avian and bat mortality rates. This project is all-inclusive, using bird plot counts during the summer and raptor (birds of prey) surveys during the winter to correlate different habitats to certain species. Our team of WTAMU students also perform searches to collect vouchers of the fatalities caused by the turbines, and we film the turbines at night to verify collision rates.

I am happy to say that I will still be around to help out my old teammates this summer, while increasing my own experience. I am involved with several research projects conducted or sponsored by the Pantex including a Texas Tech study on Swainson’s Hawks. Additionally, I will spend the summer mapping milkweed patches and counting larvae of monarch butterflies. Most of you know the importance of pollinating species, and how rapidly their populations are in decline; therefore, our efforts will help biologists gain insight into how the facility is used by this species. Some time and research will be devoted to horned lizard surveys, too. By capturing and PIT-tagging each individual horned lizard, we give that individual its own identification, then gathering information on survival and mortality rates, as well as population estimates based on the rate of recapture. I am also going to help with mapping colonies of black-tailed prairie dogs, which Pantex has performed annually for around 20 years!

Over the last few weeks, I have also participated in outreach events and learned how to band Purple Martins. The bands are like identification bracelets that give the bird both a State and Federal number. With a small group of Pantex employees and volunteers, we were able to attach small backpack like GPS and GEO data-loggers onto 31 birds. Next year, we’ll collect the data-loggers and be able to tell details of their migration flight to and from South America. The rest of days have been filled responding to nuisance calls, data entry, and attempting to catch grasshopper mice for an exhibit at the Amarillo Zoo.

I look forward to the challenge of waking up to something new each day. I have a lot to learn and some hard work ahead of me, but I am determined to make the most out of this opportunity. A special thanks goes to all the people that worked hard to open up an internship for me. I am excited for what this summer brings, and I can’t wait to share it with you. As I shadow and learn from Pantex’s own wildlife biologist, Jim Ray, my hope is that I can positively contribute to his cause by keeping Pantex a wildlife-friendly place.