The following was taken from an abstract produced in association with the Presidential Migratory Bird Federal Stewardship Award nomination process. It is Part 2 of 2:

The Pantex Plant initiated and built a long-running program beginning in 1999 that contributes to migratory bird conservation through means that include research, partnerships and outreach. The facility and its partners have definitely gone international – even hemispheric.

A banding program funded by the U. S. Department of Energy’s (DOE) National Nuclear Security Administration in cooperation with Consolidated Nuclear Security, LLC., enabled Pantex staff to promote migratory bird conservation across the Southern Great Plains of Texas and Oklahoma, and more than 10,000 eastern Purple Martins (Progne subis subis) were banded in the process. This information helped increase the information base on the eastern subspecies on the western extremity of the range.

Comprehensive work was initiated with West Texas A&M University (WTAMU) on the effects of wind energy development on migratory birds involving the monitoring of birds in plots before, and after, turbine installation. The work will also include determination of mortality levels and carcass disappearance rates. WTAMU developed a comprehensive literature review of the impacts of wind energy on wildlife and shared it with Federal and state natural resource agencies prior to the research. Hopefully, the work will produce recommendations that will minimize bird and bat mortality at wind farms and information useful to those who make decisions on where wind farms are placed.

That project also involves the study of the year-round ecology of Swainson’s Hawks using Platform Transmitter Terminal/satellite transmitters; how productivity and habitat use may be impacted by nearby wind farms; and how the hawks might be affected by wind farms even during their time in Central and South America. The U.S.G.S. Texas Cooperative Fish and Wildlife Research Unit/Texas Tech University is the lead entity on that work.

To expand its work on Purple Martins, Pantex approached a continent-wide partnership studying the connectivity of this songbird’s breeding and wintering range, offering to insure the inclusion of Texas Panhandle populations in that endeavor. This adds a site in a critical area along the western extremity of the partnership’s region of interest. Pantex now purchases and deploys geolocator- and G.P.S. tag-data loggers, and collaborates with the partnership that hopes to further this and other songbirds’ conservation through research and education in important stop-over and wintering areas in Central and South America. This study’s results could benefit other less accessible species that have similar migration strategies. The partnership is ever-growing, most recently with the awarding of a 2014 Disney World Wide Conservation Fund Grant to the Purple Martin Conservation Association for the project, Connecting Songbird Conservation Across Hemispheres. Other partners in this work include the University of Manitoba (Canada), York University (Canada) and many others, including Pantex, due to its collaboration in the project.

In 2014, DOE sponsored a Raptor Research Foundation Conference in Corpus Christi. That group has a global membership.

To date, Pantex collaborations have resulted in six Master of Science degree theses, eight journal and magazine articles, and five more manuscripts are in draft or press. Presentations have been made at 21 professional meetings across the United States and are also provided locally to various organizations. 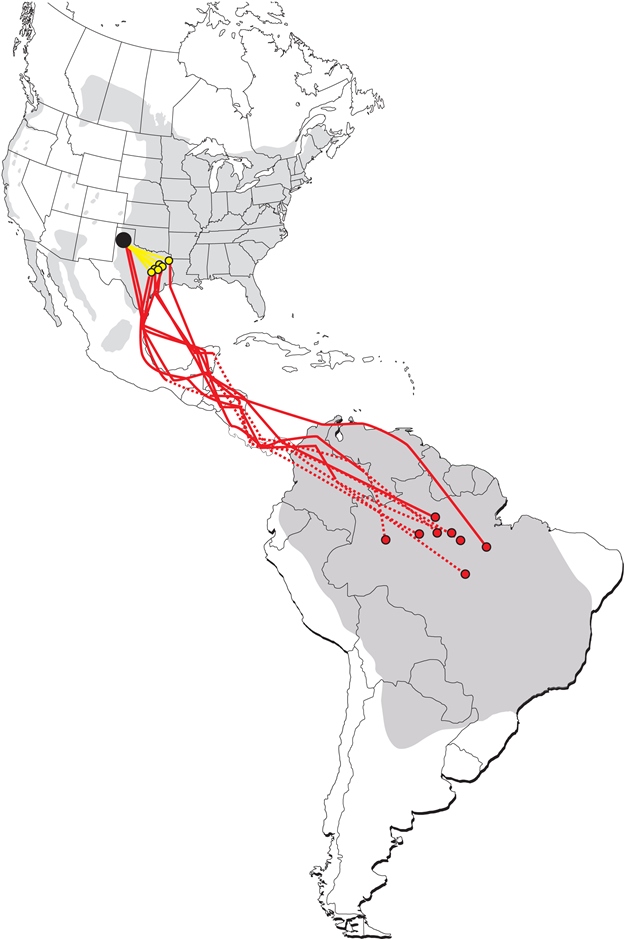 Photo: A map of the southward migration of eight Purple Martins carrying geolocator data-loggers. Most martins from other areas of the range will be in the tropics within a week of leaving their nesting sites. The area marked in yellow shows that these Texas Panhandle birds head east and spend several weeks "catching up" nutritionally, before continuing on to the tropics and ultimately the wintering areas in the Amazon basin of Brazil.