When upper level management visits your facility and wants a tour and an overview of your program, you certainly hope you are prepared and can show him or her some wildlife when you are out-and-about. Such was the case, recently, and our tour could not have gone much better.

We left my building around 8:30 a.m. and proceeded to a location where bobcats had been observed the previous day. The one minute drive resulted in the sightings of two bobcats, at least one of them a juvenile. The cats quickly ducked into cover, but, regardless it was a great start to the day.

Next, we proceeded to more outlying areas where I was able to show him areas of shortgrass prairie and playa wetlands, the plastic devices we have placed on more than 500 utility-line poles to protect birds-of-prey from electrocution, and the towers containing recording equipment that monitors bat activity as part of our wind energy research. As we drove across a pasture known as the Playa 2 Playa Management Unit, we observed a couple of pairs of burrowing owls. Pantex and collaborators have conducted a lot of work on these owls and the black-tailed prairie dogs they depend on, so I was elated that my guest was able to see them.

Next, we proceeded alongside of a shrub planting that serves as a “living visual barrier” to slow the spread of prairie dogs across our property line. I was just explaining to my guest that the two shrubs that comprise the planting – four-winged saltbush and aromatic sumac—are fantastic deer foods, when up stood a nice-looking mule deer buck and two does. Being the third of April, this was probably the latest that I had observed a mule deer with retained antlers from the previous year. Moments later, we added a pronghorn buck to our morning’s list of good finds.

Perhaps the morning’s most interesting observation was watching a falcon chase a small bird from in front of us to out of sight, far to our right. Based on its size and method of chase, I have decided it was probably a prairie falcon.

I could not have drawn up that morning any better. Well, we didn’t see a Texas horned lizard—the facility’s only year-round threatened or endangered species—which was a point of major discussion during the tour. But, we did see plenty of wildlife, which is not unusual here at Pantex. It was a very productive tour of our Wild Pantex. 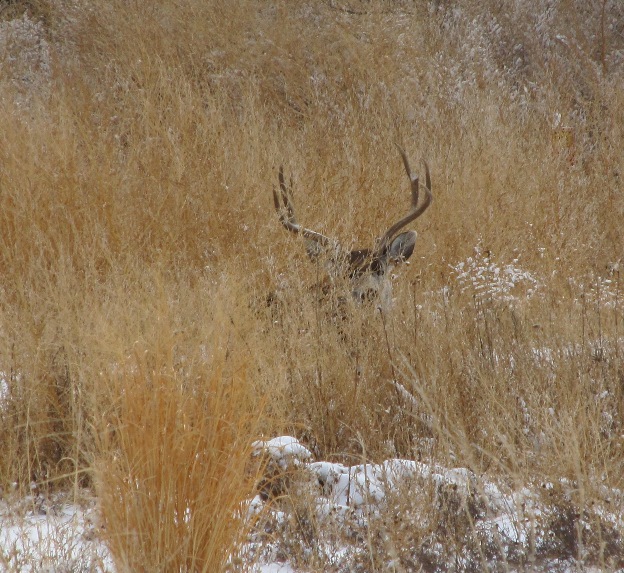 This mule deer buck makes his home on the Pantex Plant.